Finding directions and time using the Sun and a divider

There are times when you neither have your watch nor can use any magnetic compass in the location but you want to find out the time and the North-South directions. This method is useful for those such difficult situations. The divider or the dividing compass in the title of this article is actually not necessary, it is helpful but it only improves the accuracy of the method and can be replaced by any two straight sticks or even by your two stretched arms. Those situations are not very unlikely and one such situation may arise if you get lost without having your watch while traveling or if you find yourself without your watch while traveling inside a bus or a train. The method from this article gives both the North direction and the local time (local time starts its noon when the Sun is highest, local time is close to but is not the same as the official zonal time declared by the local government there.) from the position of the Sun in the sky, the latitude and the day of the year.

Figure: Finding North direction and local time with a divider (viewed against the Sun).

Figure: Finding North direction and local time with a divider (viewed against the Sun).

1.3/- There are usually two such dipping positions for leg CA, each has its dipping angle equal to the latitude angle. Only one position for CA is the correct one.

Figure: Aligning the divider along the directions of Sun rays and the laying of compass points.

Figure: Finding North direction and time using the Sun and a divider.

1.5/- The terrestrial North-South is the projection of leg CA onto the ground surface. This method gives directions with an accuracy of better than 15 degrees of angle when the Sun is far away from the zenith of the observer. 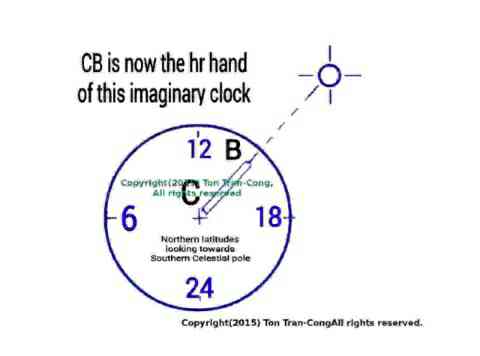 Figure: Reading time from the divider.

Figure: Daily travel of the Sun on the Celestial sphere.
1.6/- Imagine having a 24-hr watch dial mounted onto the leg CA of the divider with the marking for 0th hour on the highest position. The local time is then given by the position of leg B relative to this imaginary dial. Time reading from the position of CB gives local time with an accuracy smaller than 30 minutes.

Figure: Summary of the steps for all solar position (above and below the horizon).

The author has been using his method for more than ten years and found it to be applicable, convenient and accurate for both Northern and Southern latitudes.

1.7/ If the Moon can be seen in day light, a navigator should continue from the so determined direction of the Celestial axis to measure the declination of the Moon and its angular distance from the Sun for that day. He can then continue his accurate determination of Celestial axis during the Moon lit part of the night by replacing the unseen Sun by the Moon together with its value of declination and angular distance from the Sun supplied by himself.

C1/- Newcomers to this method should only practice it when the Sun has low elevation angle to get used to the right and left hand selection rules and to the judgement on the amount of dipping of the leg CA to find the Celestial axis.

C2/- People who fall asleep because of exhaustion or sickness may get confused between the two halves of the day on waking up and may make mistakes when using this method at that moment.

N2/- The Celestial axis for any location can be easily found by the following method: Have three similar thin sticks. Tie one of the ends of each stick to a common point P. Let the three sticks point respectively to the positions of the Sun at sunrise, sunset and noon. This can be easily done on any level sandy surface as two sticks can lay on the ground pointing from point P to sunrise and sunset directions while the third stick already has one of its ends resting on P on the ground and only needs small help to be kept in position. Let a sphere (e.g. an orange fruit or a soccer ball) with suitable size touch all three sticks at the same time (The surface may have to be dug around the sphere so that it can touch all three sticks at the same time.). The line joining P to the centre of the sphere is the Celestial axis.

Figure: Declination of the Sun from a rough graph.

N3/- The angle from the lower Celestial pole to the Sun varies like a sine wave with amplitude of 23 degrees 27minutes and period of nearly 365.25 days. It varies slowly and periodically during the year. It is the sum of 90 degrees and the declination of the Sun. The angle is exactly equal to 90 degree on Spring and Autumn equinox days (21st of March and 23 rd of September) It reaches a maximum value of 90+23.5 on local summer Solstice days (21st of June for Northern hemisphere and 21st of December for Southern hemisphere). It reaches a minimum value of 90-23.5 on local winter Solstice days (21st of December for Northern hemisphere and 21st of June for Southern hemisphere). Equinox and Solstice days of the years are the principal days for working out these values .

N4/- The markings on the dial of any analogue watch can be used to measure the angles used for the divider. Any quarter of the watch dial gives an angle of 90 degrees. One hour marking on any 12-hr watch therefore gives an angle of 30 degrees.

N5/- A watch face can be drawn on the ground to obtain more accurate value of solar declination as in the following figure (see reference [1]). 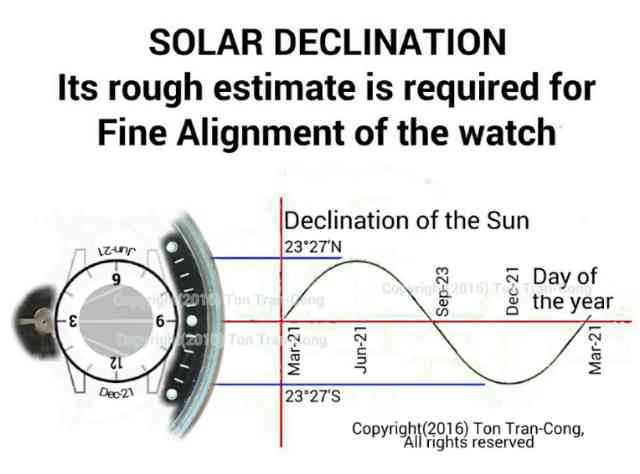 Figure: Determining solar declination using a watch face. (The lines “SOLAR DECLINATION Its rough estimate is required for Fine Alignment of the watch” are to be ignored.)

The instructional divider is built from a pocket, pen-styled (Vietnamese, Thien-Long brand) compass. The two legs are extended by pushing two plastic drinking straws (in yellow colour) onto the cylindrical ends of the compass. Fortunately, the fit is just right. The device works very well and costs me under $3USD !

Finding true North and time from the Sun with your fingers., posted on 2018 July 10

Good approximation to solar declination by a watch face, posted on February 13, 2017

Finding accurate directions using a watch, posted on May 19, 2015 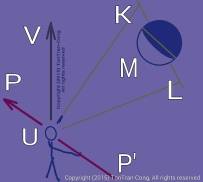 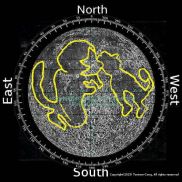 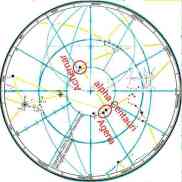 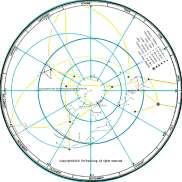 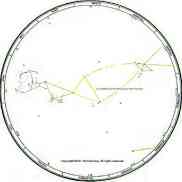 497 thoughts on “Finding directions and time using the Sun and a divider.”