#determine, #find, #find North, #time, #Sunset, #Sunrise, #time to Sunrise, #time to Sunset, #sky disk, #star disk,
Finding time to Sunrise is needed for traveling across deserts as the travellers may want to be on time to avoid excessive heat and coldness. It is also needed by long distance traders and country people who have to schedule their peak activities around Sunrise time.
Finding time to Sunrise is harder than to Sunset because the Sun is not seen before Sunrise (for people in tropical and temprate zones)! This method relies on the symmetry between Sunset and Sunrise to work out the time to next Sunrise using a circular sky map.

1. Mark the direction to the setting Sun

Use two rocks or a stick lying on the ground to mark the direction of the setting Sun.

2. Start a stop-watch.
The interval from Sunset to alignment of star maps may be significant (See the note at the end of step 5.).

3. Aligning stars and the Sun to star map

Accurately align one of the star maps (such as of this article) to the stars and align its axis to the Celestial axis so that it points to the upper Celestial pole P. Work out the half-plane of constant R.A. containing the Celestial axis and the Sunset direction half-line. This half-plane intersects the polar sky map along a radial line which is often non-horizontal. Use a paper clip to mark the intersection C of the rim of the star-map disk and the half-plane. 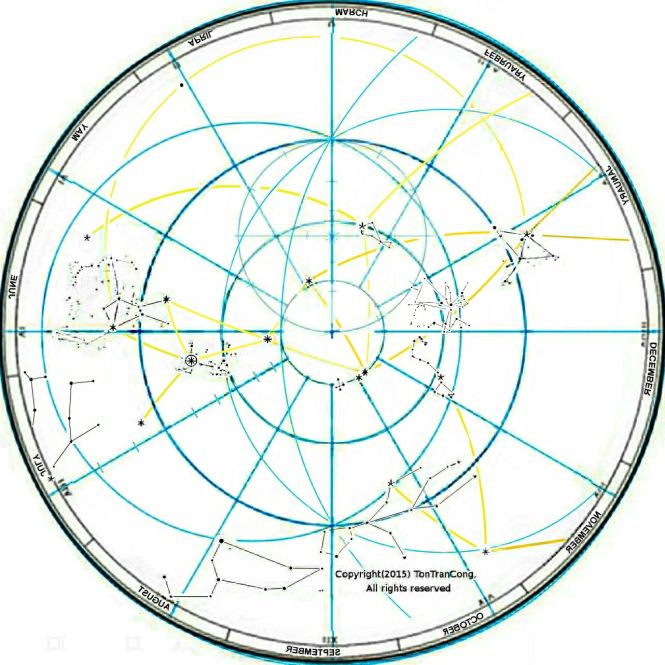 5. Adjustment of alignment of the Sun
Use the stop-watch reading to determine the small amount of time from Sunset to the successful alignment of the star map. The paper-clip on the rim should be moved to a new position toward the bottom of the sky map by an angle corresponding to the time interval given by the stop-watch.
The paper clip should now be on the R.A. half-plane containing the Celestial axis and the Sun. The Sun has moved further down under the horizon corresponding to the rotation of sky map since Sunset to alignment time.
The stop-watch of steps 2, 4 and 5 is not necessary if the rotation of the Celestial sphere during that time interval can be worked out by any other mean such as from the rotation of an early Moon which is visible both before and after Sunset.
6. Coarse time to Sunrise.
The rising Sun will be the left-right reflection image of the setting Sun through the true North-South plane . So are the two corresponding positions of the paper clip. The sky map will rotate during the night and the paper clip will move through the position for Sunrise. The time to Sunrise is the time for the sky map to rotate between its current position and Sunrise position. (One full circle is 24 hours).

7. Alternative coarse time to Sunrise by the late Moon.
A late Moon remains in the sky until Sunrise. The shape of the Moon indicates the direction of the out-of-view Sun. The Celestial axis can be determined from the declination of the Sun and the local latitude. So time for the Sun to reach the horizon can be estimated. This method has been given previously.
8. Fine time to Sunrise.

Observe the identifiable stars near the 90 degree Eastern horizon. They always rise up at the same angles (along the constant declination lines) from the same terrestrial directions on the horizon. Before the stars fade at Sunrise, pay attention to those that have risen about 1 to 5 degree from their rising positions and take notes of their travel (at angle to the horizon, along the constant declination lines) from the initial rising positions on the horizon. The stars rise 1 additional degree early for each subsequent day and new stars will appear to take their role. Using these stars close to the Eastern horizon, the time to Sunrise on subsequent days are determined with better accuracy.
Notes.
1. The motion of a new or early Moon in the sky can be used to time the interval from Sunset to alignment of the star map (by checking its rotation with the sky map). A stop-watch is not required in such a case.
2. If a large sky map is drawn on a wheel mounted on its axis aligned along the Celestial axis then a time keeper only needs to align the sky map to the stars at night and the paper clip to the Sun during day time to read fairly accurate local time from the travel of the rim of the wheel. The paper clip will make one complete rotation everyday and its position on the sky map needs adjustment by only 1 degree each day.
References

Finding directions and time using the Sun and a divider., posted on May 6, 2015.

5 thoughts on “Finding time to Sunrise with star maps”