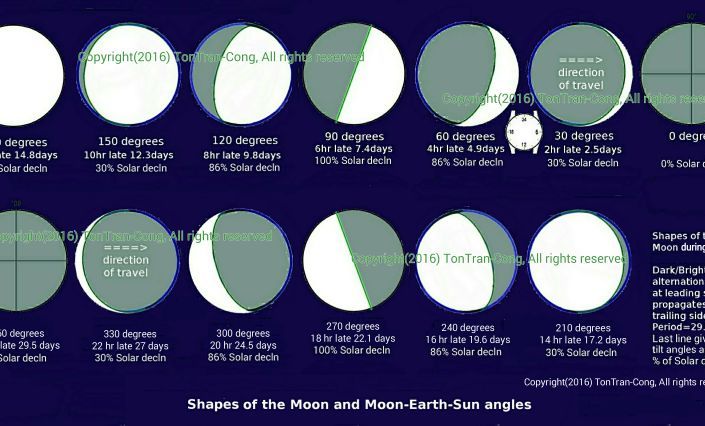 When traveling to or working with East Asia countries Westerners are sometimes puzzled by their Calendar and long New Year festivals which vary from year to year on the Western Calendar.

This blog gives simple explanation to Westerners the rules of East Asia Lunisolar calendar which is based on Celestial observations and has been designed to give season information to users.

To easily understand this article, readers are advised to first read the simple summary on stars in the sky [1] to know the declination, right ascension and the date of a star.

Simple calculations [2] shows that each lunar month is 29.530 days. Two lunar months has a length of 59.06 days. The lunisolar calendar used in China since ancient time has had Winter solstice falling on the 11th month of the year since more than 2000 years ago, since 113BC (Han Dynasty II p.38 [3]) .

The solstice point (the point from ecliptic most South of the celestial equator) is moving slowly in the sky and is currently opposite to 90 degree Right Ascension.

A lunisolar year can be made to start at any of its seasonal point, the point can be in the Winter or in the Summer. It all comes to a matter of convention. For example, the Burmese lunisolar calendar has its New Years starting when the Sun enters the constellation Aries.

For East Asia lunisolar calendar making, there are two major alternatives for determining its New Years as in the following.

Figure 1: Phase of the Moon. A new Moon is the Moon with a thin white crescent on its leading edge (top right corner of the picture) which is first visible right after sunset on the Western horizon.

If the calendar makers want their people to have simple and clear rule on the start of a New Year, they can define the New Year starting on the Second New Moon after Winter Solstice day.

This would be easy for ordinary people and people in remote areas to work out their two last (11th and 12th) lunar months of the year, and have enough time to prepare for the New Year festival.

Figure: Inversion map of the Northern Celestial 3/4-sphere. The non-concentric circle is the ecliptic and winter solstice is its most distant point from the North pole (on the left of the North pole).

Each Lunar month begins with a New Moon and ends before the next New Moon.

If the Calendar Makers insist on astronomical precision with uniform determination of months then they can define each month having to contain a star at regular spacing of Right Ascension, that is 11th month having some star of 90 degree R.A. on the meridian line at midnight on one night of the month and so on [4], [5].

Therefore they would require that

any month that has no star in the above list is called a leap month bearing the same name as its preceding non-leap month. Therefore it is hard for ordinary people to know the beginning of the Year.

I would think that the ancient Calendar makers chose the first alternative rather than the more difficult second alternative.

The second alternative also has an additional complication that there is a precession of Equinox at a rate of 360 degree per(approximately) 25,920 years. In 2000 years the Winter Solstice has moved by 27.7 degrees (about one month). Chines Calendar Makers would have noticed it and saw the need for adjustment had they chosen the second alternative but I could not find any literature about that kind of adjustment.

If East Asian Calendar Makers chose the easy rules of for determining New Year day then the 1st month of any East Asian New Year would contain a star that has a date of 18 February(= 21 December + 59.06 days), 59.06 days after Winter Solstice. That would come to a simple rule for star watchers (for the current configuration of Earth orbit):
The New Year starts on the second new moon after Winter Solstice day and the first lunar month of the lunisolar calendar should have a star of 18 February (= 21 December + 59.06 days) of Right Ascension of nearly 152 degrees (near to that of Regulus of Leo) on its meridian at midnight.

The second through to the tenth months of the lunisolar calendar have been anchored to seasons by requiring each to have a star chosen as specified in section 3. If bright stars of approximate Right Ascensions are chosen instead, there would only be more or less leap months repeating the name of the preceding months. The choice of bright stars of approximate Right Ascensions may also have been influenced by superstition and politics.

There are 24 nearly equally spaced, designated (by East Asian Astronomers) marker points on the Ecliptic called “Solar terms” in “Chinese English”. The position of the Sun relative to these markers tell its progress along the Ecliptic and the season in the year. Any leap month is inserted such that the Sun does not go far from its expected positions for the month [6].

Figure: The wavy line in this Mercator map of the sky is the Ecliptic. The Sun travels on it. There are 24 marker points on this line used by East Asian Astronomers to quantify the position of the Sun on this line. 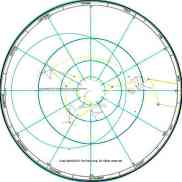