Comment by tonytran2015: This is the opening scene for the way to secession and the end of federalism.

You can read the entire document on the PDF tab below:fullDownload

Today on Steve Bannon’s War Room Pandemic, Arizona State Representative Mark Finchem, who is running for AZ Secretary of State, said that if Maricopa County Board of Elections does not turn over election routers, spunk logs, and other equipment subpoenaed by the State Senate, the issue would be turned over to the AZ Attorney General and equipment could very well be seized within the next 30 days.

Decertification of the 2020 election results by the AZ legislature is also strong possibility.

“AZ AG Mark Brnovich has this authority and he knows it,” declared Finchem.

Finchem also again pointed out that under the U.S. Constitution, states have the authority to run their own…

Centers for Disease Control and Prevention (CDC) director Dr. Rochelle Walensky Friday on Fox News Channel’s “Special Report” that the Delta variant surge can not be attributed to the high rate of coronavirus cases at the U.S.-Mexico border because the infection rate is “really quite high” in“thesouthern part of this country.”

Baier said, “One woman wrote in, Myin-laws live in Austria, theycannot come here to see theirsix-month-old baby because of theEU travel band even as migrantscome across the southern borderfrom other countries with moreCOVID and worse vaccineperformance and they are allowedin. Is that a problem, Dr. Walensky?”

Turkish company Baykar Makina uses Ukrainian engines in the production of unmanned aerial vehicles (UAVs). Now they are used on the new generation of Akıncı drones, in the future they plan to install them on all the company’s products.

According to him, among the countries neighboring Ukraine, Baykar Makina was the first company to pay attention to Ukrainian technologies and offer full-scale cooperation, which was concluded in 2018.

“Relations in the field of drone production between Ukraine and Turkey, especially in recent years, have become of strategic importance. The technology of the aviation industry of Ukraine is at the highest level, at the level of world standards. And we have something to give each other in this cooperation… we are confident that through the efforts of our scientists, Turkish and Ukrainian, we will reach new horizons in the production of high-quality unmanned aerial vehicles, “said Bayraktar.

He stressed that the construction of the UAV will develop, so cooperation with Ukraine will expand…

Comment by tonytran2015: What is the aim of giving Covid jabs to kids? To reduce the transmission rate? NO. To protect them? No, there is less obvious benefits than possible harm.

Social media users have theorized that President Andres Manuel
López Obrador could face severe repercussions after he refused to
purchase Covid vaccines for children, vowing that Mexico wouldn’t bow to
pressure from drugs firms.
In remarks made earlier
this week, the Mexican leader said his government was still waiting for
the scientific community to demonstrate the benefits of vaccinating
minors. Until conclusive evidence was provided, Mexico would refuse to
purchase jabs for children, Obrador announced, adding that
pharmaceutical firms seemed to be focused more on making profits than on
ensuring medical necessity as they rake in record sales from Covid-19
vaccines.

Mexico will not be held hostage
by pharmaceutical companies that only want to do business and scare
children with the idea that it is necessary to vaccinate against
Covid-19.

He was similarly critical of
plans by drugs companies to introduce third- or even fourth-dose booster
shots, opining that the jabs could be “superfluous.”

Speaking on the same topic, Undersecretary for Health Hugo López-Gatell claimed there was “no scientific evidence” showing the jab was “essential” for minors, given the high rate of inoculation among the adult population, Excélsior, Mexico City’s second-oldest daily, reported.

Mexico
has approved a range of Covid vaccines for emergency use, including
shots developed by Pfizer, AstraZeneca, Johnson & Johnson, and
Sinovac, as well as Russia’s Sputnik V.

The country’s Health Ministry recently revealed that a minimum of 48% of Mexicans have received at least one vaccine dose.

Like
many other countries, Mexico rolled out its inoculation program in
phases, giving high-risk groups first priority. Currently, those under
18 are not included in the vaccine drive.

Largely ignored by
international media, Obrador’s provocative remarks went viral after an
English-subtitled video of his speech was shared across social media.

Others
shared more conspiratorial reactions to Obrador’s comments. Numerous
observers theorized that the Mexican president was exposing himself to
potential harm or an “accident” by criticizing Big Pharma firms in such a blunt and direct manner.

While
Mexico doesn’t feel comfortable administering the shot to youngsters,
many other countries have begun to offer the vaccine to minors, both in
clinical trials and as part of inoculation drives. According to the Mayo
Clinic, around 14% of Americans under 18 have received at least one
Covid shot.

Besides the obvious Arizona will start the process of correcting the ballots, does this mean people are going to be kicked out of office? Does this mean the Supreme Court will finally have to address the fraud issue? There doesn’t seem to be a clear path. Maybe, it’s like playing poker you don’t want to show your Ace quite yet?

The average guy like me just looking for a little hope.

This FT video shows that there was PANIC in the air at Davos when Trump was elected. They were planning this Great Reset back then. Trump had to be removed at all costs and we are starting to witness just what that cost really was.

As the CDC urges Americans to mask up against the Delta variant, Sweden’s chief epidemiologist has argued that more data is needed about the strain’s infectiousness. His mask-free nation is hovering at zero Covid deaths per day.

Anders Tegnell said on Friday that there was “a lot we do not know” about Delta and cautioned against drawing “far-reaching conclusions” about the coronavirus strain. He noted that the variant had been circulating in Sweden “for quite some time” with little effect, particularly in high-risk settings such as nursing homes. 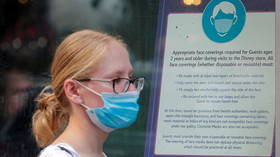 Masks off? Or masks on? A history of the CDC’s consistently inconsistent advice on face coverings

His comments were made in response to newly released data from the Centers for Disease Control and Prevention (CDC) suggesting the Delta strain is more transmissible and could potentially cause more severe illness. The New York Times and other media outlets ran stories reporting that the CDC now believes the Delta variant is as contagious as chickenpox – but this comparison didn’t seem to impress Tegnell.

“It is difficult to say how contagious Delta is, [as] when it comes to chickenpox, we have been able to follow the disease for several years. The infectivity [of Delta] seems to be very uneven – in some cases, one person infects a hundred people, then we have other occasions when an infected person does not infect anyone at all,” he told Sweden’s Aftonbladet.

In separate remarks, he pointed to the fact that one-third of the country’s municipalities reported zero new Covid cases over the past week. At the same time, there was an uptick in cases among young people in Stockholm and other large cities.

And while US health authorities are pressing Americans in “high transmission” areas to mask up, Sweden dropped its last remaining mask recommendation – related to public transport – on July 1. While Sweden’s public health agency has supported measures such as social distancing and remote working, it has no recommendations for the use of face coverings in public spaces.

Reviled by the media for refusing to impose harsh lockdowns, Sweden’s less draconian approach to the health crisis appears to be paying off: The Scandinavian nation has recorded a total of eight Covid-linked deaths so far this month, an average of 0.25 deaths per day. While it’s possible this number will increase due to reporting lags, deaths have undoubtedly plummeted over the past several months. On June 4, Sweden reported 13 deaths – more than the entire month of July.

ALSO ON RT.COMCDC releases study showing 3/4 Delta cases are among the vaccinated, says masks are the answer

Daily hospitalizations have also hovered near zero in July: On most days this month, the country saw between 0-2 Covid-cases requiring hospital treatment. At the same time, daily cases have fallen sharply since April.

Despite the promising developments, Tegnell warned against getting too comfortable. He stressed on Friday that Sweden was still in a pandemic and urged his countrymen, especially those in younger age groups, to get vaccinated.

Zhou Yusen, a decorated military scientist for the People’s Liberation Army (PLA) …, filed a patent on Feb. 24 2020, according to documents obtained by The Australian.

The patent — lodged by the “Institute of Military Medicine, Academy

of Military Sciences of the PLA” — was filed just five weeks after China
admitted there was human-to-human transmission of the virus, and months
before Zhou died under mysterious circumstances, the report noted.

… something being looked into as part of the international investigation ordered by President Biden, the paper insisted…

The Ayatollah Khomeini was sent into exile in France by the Shah Pahlavi. The Shah’s government came under pressure by Iranian Islamists. The Carter Administration was convinced the Ayatollah could return to the country and be a “peaceful spiritual leader” that would help alleviate tensions. Khomeini promised he would not attempt to take over the country. This turned out to be false. The result was the current theocracy and the removal of Iran from the list of Western allies.

The National Iranian Oil Company was confiscated by the government and became the sole oil producing company in the nation. It is currently operated by the Islamic government and exports approximately $85 billion in oil a year.

Saddam Hussein became a hero during a failed attempt to assassinate General Abd al-Karim Quasim. The official story made him out to be the one who saved the would be assassins and their Ba’athist Organization with quick thinking and firm leadership. Accounts of men who participated said Saddam’s premature firing is what caused the operation to fail. 6 of the men were sentenced to death but the executions did not take place.

Hussein escaped to Syria and later lived in Egypt. He returned in 1968 to take part in a bloodless coup. His role was insignificant except for in official records of the incident. He rose to become a military strong man and de facto leader. He nationalized the oil industry under the Iraqi National Oil Company in 1972. He became the official leader of Iraq in 1979 in the office of Prime Minister. Under Hussein Iraq was no longer a US ally but one of the Soviet Union.

He started a socialist group of Army officers (MBR-200). They attempted a coup on 4 February 1992 and Chavez was arrested. He only spent about 2 years in prison. His time in prison turned him into a rock star to the poor and working class people of Venezuela. After he was released he began touring the country and promoting his socialist politics. Leading to his successful run for president in 2002; changing Venezuela from a US ally to an ally of Iran.

Venezuela was the 5th largest oil producing nation in the world and a member of OPEC. Chavez forced foreign oil companies to sell a majority stake in their business to state owned Petroleos de Venezuela S.A. He fired the board of directors and replaced them with political allies and friends. Their salaries were raised. The company became unprofitable due to lack of experience severely damaging Venezuela’s economy. Many workers quit or were fired when they were required to be Chavez supporters to continue or begin employment. 80% of the workers quit when Chavez’s successor, Nicolas Maduro, put the company under military control.

Marxists don’t want to destroy oil companies or other major businesses; they want to take them for themselves.