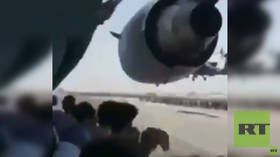 Chilling footage has emerged in recent days of Afghans clinging
to the hull of an American C-17 transport plane – but now video
seemingly taken by a man hanging onto one of the US aircraft has
surfaced.
The shocking video
spreading on social media shows the scene apparently from the opposite
perspective, though it’s not clear if the man is on the same plane as
the ones seen in other videos.

The man who appears to be sitting
atop the fairing of the C-17 military transport plane at Kabul airport
films himself and the crowds of people watching in the area surrounding
the aircraft.

The video shows at least eight men clinging to what
appears to be a fairing of the US C-17 aircraft. They wave to the crowds
standing on the edge of the tarmac as the plane gathers speed and
apparently prepares for a takeoff.

At one point, the person filming even turned the camera around to his face
for a selfie. It’s unclear whether the man fell off before takeoff and
survived to tell the tale, or if the footage was retrieved by someone else.

Media reports on Monday said several people were killed in an attempt to hold on to a plane ferrying evacuees out of Afghan’s
capital after the Taliban seized complete control on Sunday.

Other harrowing footage posted on social media appeared to show at least two
people falling to their deaths as the plane gained altitude. It is
unclear if the video shot by the man sitting on the fairing shows the
same plane.

Also on rt.com
Shocking video appears to show body dangling from US plane out of Kabul, ‘human remains’ later found in landing gear