Comment by tonytran2015: Forgetting the place and the time, the description is almost a future projection of current events in USA.

… Punishment of the scholars

According to the Sima Qian‘s Records of the Grand Historian (Shiji), after Qin Shi Huangdi, the first emperor of China, unified China in 221 BCE, his chancellor Li Si suggested suppressing intellectual discourse to unify thought and political opinion.

Chancellor Li Si said: “I, your servant, propose that all historians’ records other than those of Qin‘s be burned. With the exception of the academics whose duty includes possessing books, if anyone under heaven has copies of the Shi Jing [Classic of Poetry], the Shujing [Classic of History], or the writings of the hundred schools of philosophy, they shall deliver them (the books) to the governor or the commandant for burning. Anyone who dares to discuss the Shi Jing or the Classic of History
shall be publicly executed. Anyone who uses history to criticize the
present shall have his family executed. Any official who sees the
violations but fails to report them is equally guilty. Anyone who has
failed to burn the books after thirty days of this announcement shall be
subjected to tattooing and be sent to build the Great Wall.
The books that have exemption are those on medicine, divination,
agriculture, and forestry. Those who have interest in laws shall instead
study from officials.”[a]
—Shiji Chapter 6. “The Basic Annals of the First Emperor of Qin” thirty-fourth year (213 BC)

Three categories of books were viewed by Li Si to be most dangerous politically. These were poetry (particularly the Shi Jing), history (Shujing
and especially historical records of other states than Qin), and
philosophy. The ancient collection of poetry and historical records
contained many stories concerning the ancient virtuous rulers. Li Si
believed that if the people were to read these works they were likely to
invoke the past and become dissatisfied with the present. The reason
for opposing various schools of philosophy was that they advocated
political ideas often incompatible with the totalitarian regime.[6]

The extent of the damage…

Burial of the scholars 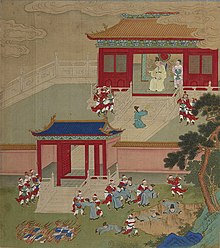 Tradition had it that after being deceived by two alchemists while seeking prolonged life, Qin Shi Huang ordered more than 460
scholars in the capital to be buried alive in the second year of the proscription. The belief was based on this passage in the Shiji [Sima Qian‘s Records of the Grand Historian (Shiji)] (chapter 6):

The first emperor therefore
directed the imperial censor to investigate the scholars one by one. The
scholars accused each other, and so the emperor personally determined
their fate. More than 460 of them were buried alive at Xianyang, and the event was announced to all under heaven for warning followers. More people were internally exiled to border regions.

One thought on “Burning of books and burying of scholars – Wikipedia”