…Nato’s secretary general has called for a “balanced approach” with
regard to rising tensions over Ukraine, saying the alliance has no plans
to deploy combat troops in the country…

Comment by tonyttan2015: Is this warship fit for battle? Has it been under cyber-attack?

The front lines of Eastern
Ukraine are snow-laden and the big guns are largely silent. But snipers
are bedded into this winter white wasteland. Ukrainian troops who forget
to stay low in their World War One-style trenches risk a bullet to the
head…

We first published Political Prisoner Nate DeGrave’s letter last October. It has since gone viral around the world and attracted the attention of journalists and politicians like Newsmax Host Greg Kelly and Rep. Louie Gohmert (TX).

… That they lost gobs of money every year didn’t matter until suddenly it did. But now there’s a new challenge heading for them...

An estimated 2 million original ballot images from the 2020 Election were destroyed illegally in Georgia since the election. This is illegal and yet no one has been arrested or held accountable.

Back in November, 2021, VoterGA, an election integrity group based in Georgia, reported that 74 counties in Georgia couldn’t produce their original 2020 Election ballot images. At the time we reported this President Trump asked why Georgia officials allowed this to happen since it’s clearly against the law?

What we didn’t realize at this time was the extent of this crime. VoterGA indicates that this crime resulted in all or a material amount of 2 million original ballot images being destroyed.

VoterGA posted a list of facts from Georgia that demand an audit.

Why are people allowed to get away with major crimes in the 2020 Election and no one is held accountable or arrested? If we don’t have legitimate elections, we don’t have our country.

Comment by tonytran2015: Iron swords, strategic advanced weapons have appeared 2800-3000 years ago but were still largely unknown outside Northern Europe. In 200BC Han China still banned the sale of cast-iron plow tips to NamYue (Nam-Viet in Vietnamese) for strategic reason.

Part of a Bronze Age settlement was uncovered at Must Farm quarry, at Whittlesey, near Peterborough, in Cambridgeshire, England. The site has been described as “Britain’s Pompeii” due to its relatively good condition, including the “best-preserved Bronze Age dwellings ever found” there, which all appear to have been abandoned suddenly following a catastrophic fire.[1] Research now suggests that the site was less than one year old at the time of destruction.[2][3]

Iron and Bronze Age swords from Must Farm

Comment by tonytran2015: Huge constructions built without drawings and written instructions/specifications. It is amazing.

Göbekli Tepe (Turkish: [gœbecˈli teˈpe],[2] “Potbelly Hill”;[3] known as Girê Mirazan or Xirabreşkê in Kurdish[4]) is a Neolithic archaeological site near the city of Şanlıurfa in Southeastern Anatolia, Turkey. Dated to the Pre-Pottery Neolithic, between 9500 and 8000 BCE, the site comprises a number of large circular
structures supported by massive stone pillars – the world’s oldest known
megaliths. Many of these pillars are richly decorated with abstract anthropomorphic details, clothing, and reliefs of wild animals, providing archaeologists rare insights into prehistoric religion and the particular iconography of the period. The 15 m (50 ft)-high, 8 ha (20 acres) tell also includes many smaller rectangular buildings, quarries, and stone-cut cisterns from the Neolithic, as well as some traces of activity from later periods. 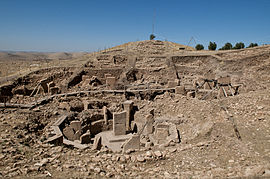