Senator Rand Paul has had several run-ins with Dr. Fauci during testimony about funding the gain-of-function research in Wuhan, China. Fauci lied and said the National Institutes of Health didn’t fund the research when it did.

The NIH just released a statement setting the record straight that they did fund the research in Wuhan, China. Still, they throw Peter Daszak’s EcoHealth Alliance under the bus by saying they “violated terms and conditions of the NIH grant.”

Richard Ebright tweeted out about how these frauds brazenly lied and listed each offense below:

Fauci and Collins blatantly lied to Americans about what was going on in Wuhan, China. Will they be punished?

…That was until Richard Alexander “Alex” Murdaugh’s
wife and youngest son were shot and killed at the family’s hunting lodge earlier this year.

The murders attracted national attention, setting off a chain of events that culminated in Alex
Murdaugh leaving his family’s law firm amid allegations of missing money
and revelations of an opioid addiction….

As investigators started to pick through what happened, there was yet another stunning revelation…

More than 60 concerned parents, students and residents came out last night at the Loudoun School Board meeting to voice their anger at the disgusting story alleging a school cover-up of alleged sexual assaults by a transgender boy.

This enraged the father who was at that meeting and who had also reportedly been given a no trespassing order to keep him from telling what happened. Then, an activist claimed his daughter wasn’t telling the truth and a scuffle broke out during which time the father was thrown to the floor and arrested. The father said he tried to pull his arm back after an officer grabbed it and you can see that’s true on the video.

He’s now being prosecuted. And the NSBA cited an “arrest in Virginia” referencing that meeting and falsely claiming the arrest was about CRT when they appealed to the FBI to do something about parents who they suggested could be “domestic terrorists.”

While the school went after the father, they moved the skirt-wearing boy to another school. Reports allege that he there committed another sexual act against another girl on October 6.

On Tuesday night, the parents demanded the resignation of the superintendent, Scott Ziegler for the cover-up. The parents were also upset about “8040” the policy that allowed the “gender fluid” boy to use the bathroom he chose. 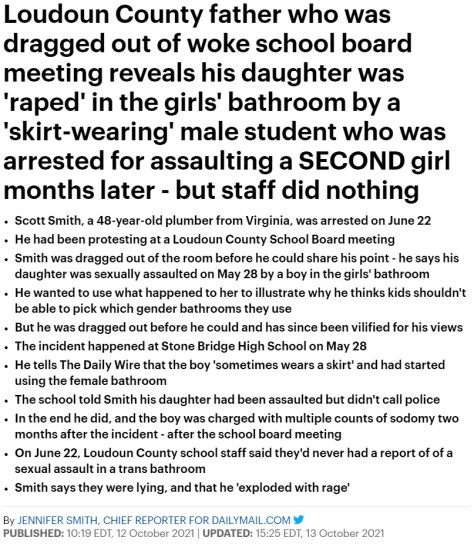 Imagine that you are a typical gay person or say a gay lady who prefers men’s styling or an athlete with a last name of Jenner. You work a regular job like most people, you love your mom and you like a good pizza, just like everybody else.

Yours truly has been asking gay and trans people about this and they are infuriated.

Being gay/trans comes with extra drama as they will tell you and the last thing they need is pedophelia/bathroom rape or other crimes associated with them. Gay/trans people are disgusted by what they see as fake trans men putting on a skirt so they can strut into the girls bathroom or shower and cause trouble. Woke leftists have been hiding behind gays when advocating the normalization of pedophelia for years.

“How dare you criticize us, you just hate LGBT blah blah blah”

The vast majority of gay people are sick of it.

Steven Crowder did an episode of his show about pedophiles and fake trans criminals are taking advantage of woke leftism in order to cover for their crimes, violating children, girls in bathrooms etc.

Crowder sourced his information with evidence that is verifiable and posted the sourcing on his web site for all to see.

When gay and trans people speak out against woke leftists hiding behind them to cover for criminal activity, the corpomedia almost never reports it. The result is that people not familiar with LGBT start to associate or draw an equivalence between LGBT and criminal sexual conduct because they keep hearing that association again and again. They don’t hear anyone countering the narrative.

We hope LGBT gets really loud in countering the criminal woke leftist/corpomedia narrative as such narrative will inevitably lead to persecution by those who believe it.

ALAN KOHLER writes in ‘The Real Scandal in the Pandora Papers’

‘The most disturbing part of the Four Corners program this week about the PANDORA PAPERS leak was the statement by Greens Senator Peter Whish-Wilson that lobbying and donations by lawyers, accountants and real estate agents have successfully blocked any action on money laundering in Australia.

CAAN: Sadly this is true!

HOW did this ‘Pushback’ happen? Lobbying by the Real Estate Institute and the Law Council!

It appears the gatekeepers dodged the responsibility by passing the buck when then President of the Real Estate Institute of Australia, Adrian Kelly said that others should also bear the regulatory burden…

… The government said that the video below had to be kept secret for “national security” and as you can see for yourself that is just a lie. The government was forced to release this video by the court. 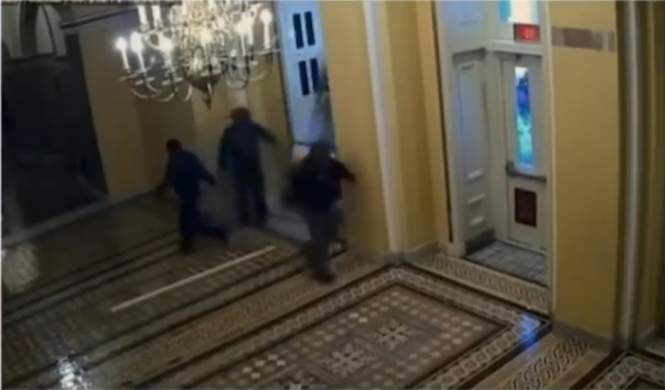 The video shows men dressed the same as the federal agent who was arrested in the video above, break a window and enter the Capital. The video shows them being confronted by Capitol security who after talking with the window breakers for a few moments simply walk away. It seems obvious that the window breakers identified themselves as federal agents.

The FBI is amassing a long list of crimes they either helped orchestrate or let happen.

… A far-left Antifa leader has been arrested and charged for shooting somebody who was protesting Big Pharma.

Benjamin Anthony Varela, 36, has been charged with first-degree assault while armed with a deadly weapon. If found guilty he could spend up to twenty years in jail.

On Sept. 4, a couple dozen Antifa from around the Pacific Northwest traveled to the Washington state Capitol building to try to shut down an anti-COVID vaccine mandate protest. The black-clad group was met by the rally’s volunteer right-wing security, who included Proud Boys members. When the Antifa group ran to the Intercity Transit Station, one of their masked members turned around and fired five 9mm pistol rounds in the direction of the right-wing group, which was about 50 feet behind, according to security footage. Proud Boys member Tusitala Toese was injured in the shooting.

The FBI is facing yet another controversy over what court documents is the theft of the life’s savings of 800 random people at the U.S. Private Vaults safety deposit box storage in Beverly Hills .

Federal agents raided U.S. Private Vaults and asserted in court last February that the business was a front for laundered drug money. Six months later, nobody has been charged and the US Attorney prosecuting the case has not provided any updates.