https://www.nationandstate.com/2022/06/10/supreme-court-allows-pennsylvania-to-continue-counting-undated-ballots/?amp
Pennsylvania’s mail-in ballot practices have been under intense scrutiny since the 2020 presidential election Go to Source Author: {Just The News}… Read more

After 11 months, nearly 100
subpoenas and more than 1,000 interviews, the congressional committee
investigating the 6 January, 2021, attack on the US Capitol will step
out from behind closed doors and hold a series of public hearings to
present its findings. The first one is on Thursday.

Dinesh D’Souza’s film, 2000 Mules, was just released, and it is jaw-dropping. The level of questionable practices and outright cheating is staggering. To oversimplify: Using high-tech forensic geolocation, cell phone information was collected that proved that ballot drop-offs at multiple boxes miles apart by the same “mule” were in progress. A mule is a paid or unpaid person who (in this case) drops illegal ballots off at these drop boxes.

D’Souza’s team set the bar to determine fraud deliberately high so that results of this investigation could not easily be questioned or passed off as mere coincidence. Stringent criteria were set up so that video evidence of highly suspicious drop box activity would be easily verified by unbiased parties. D’Souza was inordinately careful so that his film would not be dismissed or ridiculed by rational people. The purpose was not necessarily to claim that Trump won and Biden lost. The purpose was to demonstrate how easy it is to cheat and that cheating did indeed take place in the 2020 election.

Independent Voter site Balladeer’s Blog has often stated the opinion that America’s career politicians are actually just career white-collar criminals. At no time was that more clear than when the outsider – de facto Third Party President Donald Trump – was a threat to rock the boat of the cesspool of corruption that masquerades as the U.S. government. As a man who was NOT a career politician or “made man” in the political swamp he had to fight both political parties from the start.

All of the accusations that Trump hurled against the political establishment have been proven true over the years but anti-Trump loons always accused him of lying, then ignored every instance of Trump being proven right. To uninformed fools here and in other countries the number of accusations that Trump supposedly “lied” served to fuel their pompous assumptions about him.

Now comes the revelation regarding a conspiracy to frame President Trump (links below) and regarding more of the lies from the Hillary Clinton campaign.

The criminal trash who run America’s Democrat and Republican Parties are far worse than Trump ever was.

On a more positive note, Pennsylvania, one of the disputed states in the forever-tainted 2020 presidential election, has passed two more election integrity bills to hopefully prevent a recurrence of the widespread fraud and other irregularities from 2020.

For the full stories on the recent revelations regarding the Sussmann case and the conspiracies against de facto Third Party President Donald Trump click HERE and HERE and HERE.

…Here’s a woman dropping off stacks of mail-in ballots …

…The former CEO of Overstock.com, Patrick Byrne, has teamed up with retired Lt. Gen. Michael Flynn to expose the theft of the 2020 United States presidential election. Toward this end, these two figures have co-founded a group called the America Project to train volunteers to “expose shenanigans at the ballot box.” This group is already meeting with success. As Byrne recently announced, there is enough evidence of voter fraud to decertify the election in at least three states...

https://www.nationandstate.com/2022/04/03/bill-maher-the-left-wing-media-buried-hunter-biden-story-because-it-wasnt-part-of-their-narrative/?amp
Bill Maher: The Left-Wing Media “Buried” Hunter Biden Story Because It “Wasn’t Part Of Their Narrative” The mainstream media’s decision to admit – more than a year after the fact – that the Hunter Biden laptop story was, in fact, legitimate (and not the product of ‘Russian disinformation, as a procession of high-ranking Democrat spies…

Seeing all the Hunter Biden stories surface, you can’t help but think that somebody has decided that it’s time to get rid of his dad. From Tyler Durden at zerohedge.com:

With the Hunter Biden laptop scandal heating up again, CBS News‘ Catherine Herridge reported early Thursday morning that two associates of the younger Biden testified before a grand jury last fall about a shady, now-bankrupt Chinese energy company linked to the infamous “10 for the big guy” from Hunter’s emails. 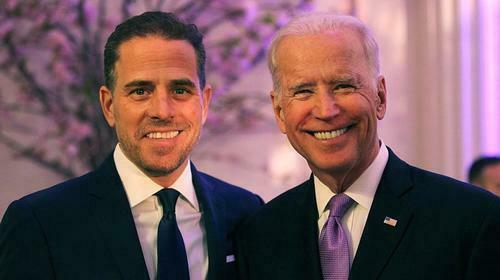 “Federal officials are looking at his foreign business dealings, including his ties to a Chinese energy company,” said “CBS Mornings” host Tony Dokoupil.

“The investigation began as a tax inquiry years ago and has expanded into a federal probe involving the FBI and IRS,” Herridge added. “A source familiar with the investigation now tells CBS News, two men who worked with Hunter Biden when his father was Vice President were called to the grand jury last fall.”