The Saky base in the west of Russian-ruled Crimea was rocked by a string of blasts on Tuesday, killing one person.

President Volodymyr Zelensky of Ukraine has
reiterated the fact that Crimea is part of Ukraine, and that the
country will never leave it behind. The Russian war, which started with
Crimea, must end with its liberation, the leader stressed.
The president made the statement in a video address to the nation, released on August 9, Ukrinform reports.

“This Russian war against Ukraine and against all of free Europe
began with Crimea and must end with Crimea – with its liberation,” the
Ukrainian president said.

According to Zelensky, there is a lot of attention these days to the
topic of Crimea, which is right. “Because Crimea is Ukrainian, and we
will never leave it behind. We will not forget that the Russian war
against Ukraine began with the occupation of Crimea. Russia has turned
our peninsula, which has always been and will continue to be one of the
best places in Europe, into one of the most dangerous places,” Zelensky
emphasized.

Read also: Crimea to be not a military base for terrorists but world resort – Office of the President

He noted that the Russian Federation brought large-scale repression,
environmental issues, economic hopelessness, and war to Crimea. The very
presence of Russian occupiers in Crimea is a threat to all of Europe
and global stability, the head of state added.

“Maybe one day historians will determine how many people were killed
by Russia’s terror. Tens of thousands? Hundreds of thousands? From
Ukraine and Georgia to Syria and more distant regions,” Zelensky said.

He is convinced that the Black Sea region cannot be safe as long as
the peninsula remains occupied. There will be no stable and sustainable
peace in many Mediterranean countries either as long as Russia is able
to exploit the Ukrainian peninsula as its military base, Zelensky
believes.

As Ukrinform reported earlier, the occupying “authorities” of Crimea
confirmed the explosions in the Novofedorivka area, where the Russian
military air base is located. Ambulance vehicles were seen rushing to
the scene.

The Ministry of Defense of Ukraine in a comment on the “fire” at the
Saki airfield near Novofedorivka in the temporarily occupied Crimea said
it cannot verify the cause of fire, but once again reminded that the
occupation authorities should abide by “fire safety rules and refrain
from smoking in undesignated areas.”

The “authorities” in Crimea have confirmed
explosions near Novofedorivka, where a Russian military airbase is
located, with ambulances rushing to the scene.
That’s according to the Telegram channel of the Russian state news agency RIA-Novosti, Ukrinform reports.

At the same time, the local single dispatch service clarified that, in addition to ambulances of the Saky district and Yevpatoria, emergency services are working in Novofedorivka.

Earlier, the media reported
that, according to three local witnesses, they heard several loud
explosions in the village and saw black smoke rising from the direction
of a Russian military airbase. Smoke is visible on the beach in
Yevpatoria, located 30 kilometers from Novofedorivka.

According to Telegram channels, the explosions occurred near the
airfield of the Russian Armed Forces (the Saky military airfield is
located in the village). Six to seven explosions were reported, with
eyewitnesses saying they hear “something like the detonation of shells”
every minute.

Residents of Crimea also reported explosions near the military airfield in the village of Novofedorivka.

…These vast military exercises would have taken some planning. It is hard
to imagine that the generals conceived of them, all of a sudden, when
it was leaked that Ms Pelosi was planning visit Taiwan…

Russia’s defence ministry later said ammunition was detonated, but this has not been independently verified.

The ministry said there was no “fire impact” on the ammunition storage area, Russia’s state-run Ria news agency reports.

Russia is likely exploiting the Zaporizhia
Nuclear Power Plant in Enerhodar, Ukraine, to play on Western fears of a
nuclear disaster.
That’s according to Ukraine’s state-owned nuclear operator Energoatom, citing a report by the Institute for the Study of War.

“Russian forces are likely using Ukraine’s Zaporizhzhia Nuclear Power
Plant (NPP) in Enerhodar to play on Western fears of a nuclear disaster
in Ukraine, likely in an effort to degrade Western will to provide
military support to a Ukrainian counteroffensive,” the report reads.

The experts also noted that Russian forces based around the NPP have
attacked Ukrainian positions in Nikopol and elsewhere in recent weeks,
intentionally putting Ukraine in a difficult position – either Ukraine
returns fire, risking international condemnation and a nuclear incident
(which Ukrainian forces are unlikely to do), or Ukraine allows Russian
forces to continue firing on Ukrainian positions from an effective “safe
zone.”

Read also: Russia behaves like “a monkey with a nuclear grenade” – Ukraine at UN

It was earlier reported that the Russian forces deployed heavy
military equipment right on the premises of the Zaporizhia NPP. They
have long been shelling Nikopol and Marhanets from the NPP’s satellite
town of Enerhodar.

Russian invaders captured the ZNPP on the night of March 4. 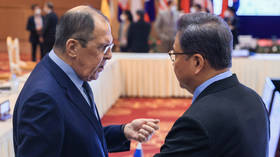 The
statement comes amid growing tensions between Beijing and Washington
following US House Speaker Nancy Pelosi’s visit to Taiwan.

“Russia
has been consistently upholding the ‘one-China’ principle, standing
against any encroachments on our country’s sovereignty,” Chinese Foreign Minister Wang Yi said after talks with his Russian counterpart, Sergey Lavrov in Cambodia on Friday.

“Beijing
is ready to strengthen strategic cooperation with the Russian
Federation so we could more effectively defend an international system
where the UN would play the key role, and an order based on the norms of
international law.”

Wang’s remarks come in the wake of
tensions sparked by Pelosi’s visit to Taiwan this week. Beijing
considers the self-governed island as part of its territory and strongly
opposes any form of recognition of Taipei as an independent nation.

READ MORE:
China cuts ties with US on critical issues

China accused the US of undermining its sovereignty and launched snap military exercises around Taiwan in response to the trip.

On
Friday, Beijing announced its decision to impose sanctions on Pelosi
and her immediate family members. It also cut ties with Washington in a
number of military and civilian areas.

The Russian Foreign Ministry released a statement on Tuesday, saying the visit was a sign of Washington’s “aggressive” policy, aimed at the “all-encompassing containment of China.”

A recent Ukrainian strike against a Russian
ammunition train in the Kherson region will significantly complicate
logistics for the Russian army on the southern axis.
The UK Ministry of Defense said this in its latest intelligence update, Ukrinform reports.

“As a result of a Ukrainian
strike against a Russian ammunition train in Kherson oblast, southern
Ukraine, it is highly unlikely the rail link connecting Kherson with
Crimea remains operational. Russian forces are likely to repair the
railway line within a few days, although it will remain a vulnerability
for Russian forces and their logistical resupply route from Crimea into
Kherson,” the ministry said.

It also added that the ferry crossing over the Dnipro River, which
the Russian invaders established after the Antonivka Bridge near Kherson
was damaged, will almost certainly be used for troop movements and
logistical resupply.

“It is likely we will see an increase in civilians attempting to flee
Kherson and the surrounding area as hostilities continue and food
shortages worsen. This will create pressure on transport nodes and
routes, likely resulting in measures to control movement being
implemented,” the ministry said.

On the night of August 3, the Ukrainian military destroyed two more enemy ammunition depots in Kherson region.
“Kherson region… Two orcs’ depots were destroyed at night
in the area of Beryslav and Chornobayivka. Once again, the Armed Forces
of Ukraine hit enemy’s rear reserves,” Serhiy Khlan, member of the
Kherson Regional Council, posted on Facebook.

As reported, the Ukrainian
army destroys logistics centers behind enemy lines with the help of new
high-precision weapons. On the night of July 30, the Ukrainian military
hit a train of Russian invaders that arrived at the Brylivka station in
Kherson region. The train consisted of more than 40 wagons with
manpower, equipment, and ammunition.

As a result of Russian missile strike on
Lviv region, two explosions occurred in the territory of a military unit
in Chervonohrad district.
Maksym Kozytskyi, the head of Lviv Regional Military Administration, said in a Telegram post, Ukrinform reports.

“Unfortunately, a military
unit in Chervonohrad district was hit. There is no information about the
victims. The scale of destruction is still being determined,” the
regional governor said.

He also added that the enemy launched eight cruise missiles from the
eastern direction, some of them were shot down by Ukrainian air defense
forces in other regions.

According to Kozytskyi, no casualties have been reported in Lviv region.

As the General Staff earlier reported, the Ukrainian air defense
forces destroyed seven out of eight cruise missiles that the Russian
forces fired at the territory of Ukraine from the Caspian Sea. As a
result of the strike, an anti-aircraft missile system was destroyed in
Lviv region.