Three civilians have been killed in Russia’s shelling of the Bilozerka territorial community, Kherson Region.
The relevant statement was made by Kherson Regional Military Administration on Facebook, an Ukrinform correspondent reports.

Kherson Regional Military Administration Head Yurii Sobolevskyi noted
that Russia’s shelling of the urban-type settlement of Bilozerka is
another war crime committed by the occupation forces. He called on local
residents to stay alert and careful during shelling.

A reminder that a young teacher, Daria Holik, was reported killed in Russia’s shelling of Bilozerka, Kherson Region.

…Yury Borisov, the deputy prime minister in charge of military development, told Russian TV that a laser prototype called Zadira was
being deployed in Ukraine and had burned up a Ukrainian drone within
five seconds at a distance of 5km (three miles).

The diplomat theorized that Russia may have suffered “impressive losses”
since attacking Ukraine, suggesting casualties of as many as 15% of its
troops, but demurred when asked how long he felt the war might
continue, stating “I wouldn’t dare to make an hypothesis about how long Russia can resist.” 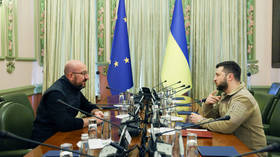 EU to go into debt for Ukraine – Politico

On Friday, Borrell announced another $526 million (€500 million)
package of lethal aid to be sent to Kiev, bringing the total amount
pledged to $2.11 billion (€2 billion). The money would buy heavy weapons
such as tanks and artillery, he said, adding that he was also
optimistic the continental alliance would reach an elusive agreement on a
Russian oil embargo.

The promised embargo failed to materialize
on Monday as the EU devised its sixth package of anti-Russia sanctions.
Hungary, said to be the last remaining holdout, has demanded hundreds of
millions of dollars in compensation, having repeatedly argued that
cutting itself off from Russian oil and gas would do significantly more
harm to its own people than to Moscow.

Following Russia’s attack
on Ukraine, the EU took the unprecedented step of providing €450 million
in lethal aid to Kiev, with several member states following suit. The
bloc previously had a policy of not supplying weapons to countries
involved in a conflict. In attempting to justify the decision, Borrell
declared that “we live in unprecedented times,” arguing “this war requires our engagement in order to support the Ukrainian army.” While Ukraine is seeking to join both the EU and NATO, it is currently a member of neither alliance.

Earlier on Tuesday, Russian Foreign Minister Sergey Lavrov expressed doubt that Western states seek to benefit Ukraine: “Nobody
cares about Ukraine. Ukraine is an ‘expendable material’ in the proxy
war against Russia. There can be no doubts about it now. It has been
voiced publicly.”

Russia attacked the neighboring state in late February,
following Ukraine’s failure to implement the terms of the Minsk
agreements, first signed in 2014, and Moscow’s eventual recognition of
the Donbass republics of Donetsk and Lugansk. The German- and
French-brokered Minsk Protocol was designed to give the breakaway
regions special status within the Ukrainian state.

The Kremlin has
since demanded that Ukraine officially declare itself a neutral country
that will never join the US-led NATO military bloc. Kiev insists the
Russian offensive was completely unprovoked and has denied claims it was
planning to retake the two republics by force.

Russia has already lost about 28,300 troops in Ukraine (+400 over the past day).
The relevant statement was made by the General Staff of the Armed Forces of Ukraine on Facebook, an Ukrinform correspondent reports.

Over the past day, Russian troops have suffered the highest losses in
the Sloviansk, Kryvyi Rih and Zaporizhzhia directions. The data are yet
to be updated.

The United States has already supplied
Ukraine with more than 130,000 155-mm shells for the M777 howitzers,
which is almost two-thirds of the intended number.
This was announced in a telephone briefing by a high-ranking Pentagon official, Ukrinform’s own correspondent reports.

As for 155-mm shells, 64% of the total has been delivered, the
official told the press, recalling that after the latest announcement
of the $150 million assistance package, the total number is 209,000 for
the 155 mm caliber, so more than 130,000 of the shells have already been
delivered to Ukraine.

He noted that deliveries continue daily, and not only from the United States.

Ten flights from seven different countries have arrived in the region
over the last 24 hours, the official said, adding that the United
States continues to coordinate international efforts to this end.

He also informed that the Ukrainian military is undergoing training,
mastering M777 howitzers, as well as the Puma unmanned systems.

In addition, the Pentagon spokesman confirmed that three of the
eleven Mi-17 helicopters had already been transferred to Ukraine. And
one of them, as per the Ukrainian side, has already carried out two
combat missions.

The representative of the U.S. Department of Defense also noted that
there are currently at least 106 Russian battalion tactical groups
operating on the territory of Ukraine. Moreover, the main forces of the
Russians are amassed near Izium and north of Lyman.

As Ukrinform reported, over the past 24 hours, Ukrainian forces have
continued to destroy enemy manpower and equipment. The enemy suffered
the greatest losses in the Bakhmut and Zaporizhia directions.

Photo: Commander-in-Chief of the Armed Forces

The Russian army has resorted to an
increasing reliance on indiscriminate artillery bombardment in Ukraine
due to an unwillingness to risk flying combat aircraft.
According to Ukrinform, the UK Ministry of Defense said this in its latest intelligence update published on Twitter.

“Russia has likely resorted to an increasing reliance on
indiscriminate artillery bombardment due to a limited target acquisition
capability, and an unwillingness to risk flying combat aircraft
routinely beyond its own frontlines,” the ministry said.

It added that in the coming weeks, Russia is likely to continue to
rely heavily on massed artillery strikes as it attempts to regain
momentum in its advance in the Donbas.

According to the update, in the Chernihiv region north of Kyiv,
approximately 3,500 buildings are estimated to have been destroyed or
damaged during Russia’s abandoned advance towards the Ukrainian capital.

“80% of the damage has been caused to residential buildings,” the ministry added.

US could suspend weapons shipments to Ukraine

Aid to Kiev may be disrupted if Congress doesn’t pass $40 billion spending package by May 19, Pentagon says
The flow of US weapons to Ukraine might be cut off, at least temporarily, unless Congress quickly approves nearly $40 billion in new spending to help Kiev repel Russia’s offensive in the former Soviet republic, the
Pentagon has warned.

“May 19 is the day we really, without additional authorities, we begin to not have the ability to send new stuff in . . .,” Pentagon spokesman John Kirby told reporters on Friday. “By the 19th of May, it’ll start impacting our ability to provide aid uninterrupted.”

Weapons shipments to Kiev wouldn’t immediately stop on May 20 without new
funding because there would still be some supplies in the pipeline purchased under the approximately $100 million in spending authority
that the Pentagon currently has remaining for Ukraine aid, Kirby said.
However, he added, but by losing its ability to source new cargoes, the
Pentagon would face “a period of time with nothing moving” if there’s an extended delay in the new funding approval.

“We’ve been moving at a fairly fast clip here, both in terms of the individual
packages that have been approved and how fast that stuff is getting into Ukrainian hands,” Kirby said. “Literally, every day, there are things going in, and we would like to continue to be able to
continue that pace for as long as we can.” 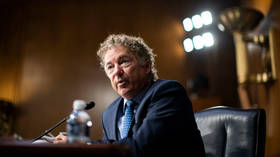 Washington’s latest Ukraine aid package, valued at $39.8 billion, was overwhelmingly approved by the House on Tuesday night, but the Senate failed in an effort to fast-track the bill for approval on Thursday.
Senator Rand Paul (R-Kentucky) objected to unanimous consent – a
provision that allows for bills with strong bipartisan support to go to a
quick vote without debate – after Senate Majority Leader Chuck Schumer
(D-New York) refused to add language to the aid legislation requiring
that an inspector general be appointed to oversee how the money is spent.

Schumer excoriated Paul for standing in the way of quickly approving the massive aid package and argued that Washington has a “moral obligation”
to help Ukraine fight Russian forces. Senate Minority Leader Mitch
McConnell (R-Kentucky) also pressed for an immediate vote on the bill,
but Paul’s objection meant that passage would be delayed to next week at
the earliest.

Paul argued that Americans are already “feeling the pain” of an inflation crisis, which he said was driven by excessive deficit spending, “and Congress seems intent on only adding to that pain by shoving more money out the door as fast as they can.” He added, “We cannot save Ukraine by dooming the US economy.”

Kirby reiterated a Pentagon request to provide new Ukraine funding by the third week of May. “Obviously,
we continue to urge the Senate to act as quickly as possible so that we
don’t get to the end of May and not have any additional authorities to draw upon.”

The Ministry released a video of one of the proofs of howitzers’
effectiveness: destroyed Russian crossing and about 70 units of enemy
equipment.

In late April, US Secretary of Defense Lloyd Austin announced the
establishment of an international contact group on Ukraine’s defense
with the participation of more than 40 countries.

The US Department of Defense established the EUCOM Control Center of
Ukraine (ECCU) to coordinate and optimize the arms supply to Ukraine
from the United States and its allies.

Russia has lost another Black Sea Fleet ship in its war against Ukraine.
The General Staff of the Armed Forces of Ukraine said this in a report on enemy losses on May 5, Ukrinform reports.

“Russia’s losses among ships and boats are 11, i.e. plus one for the past day, on May 5,” the statement said.

At the same time, the General Staff and the Operational Command South
have not provided any details on the loss of the enemy ship.

According to media reports,
a Ukrainian Armed Forces unit struck the Russian frigate Admiral
Makarov, which was damaged and is burning in the Black Sea near Zmiinyi
(Snake) Island. Russian aircraft are now circling over this area of the
Black Sea, and rescue vessels have come out of the temporarily occupied
Crimea to help the ship

…This was preceded by a series of new lavish spending packages for the war, unveiled every two to three weeks, starting on the third day of the war:

Those amounts by themselves are in excess of $3 billion; by the end of April, the total U.S. expenditure on the war in Ukraine was close to $14 billion, drawn from the additional $13.5 billion Congress authorized in mid-March. While some of that is earmarked for economic and humanitarian assistance for Ukraine, most of it…