The president and First Lady Melania had gone into isolation earlier on Thursday evening after learning their aide Hope Hicks had the virus.

‘I would expect them [the planes] to pop up if he tests positive,’ Hogan said.

He said that most planes switch their transponders off to avoid being tracked, but in this case, the military planes want to be seen.

The planes’ very public departure is widely-interpreted as a signal to other countries that the US chain of command – right up to those who can launch nuclear weapons – remains alert and primed, despite the president’s illness….

… And in typical fashion, the roused president has gone on an immediate rhetorical offensive.

Trump has doubled down on his affirmations towards the U.S. military and the American soldier, while simultaneously confronting the class of generals who command them. “I’m not saying the military’s in love with me—the soldiers are,” Trump said at a Labor Day press conference. “The top people in the Pentagon probably aren’t because they want to do nothing but fight wars so that all of those wonderful companies that make the bombs and make the planes and make everything else stay happy.”

“Turkish and Greek fighter jets have engaged in a mock dogfight over the eastern Mediterranean, the second direct confrontation between the two Nato powers this month,” The Times writes. “Ankara sent F-16s to intercept six Greek jets as they returned from Cyprus — where they had been participating in war games — to their base in Crete.”

Subsequent Turkish cockpit video allegedly from the encounter appears to show that during the intercept a Turkish F-16 achieved radar lock on a Greek fighter, but did not fire.

Viral radar video published by Turkey’s Ministry of Defense on Friday shows the risky jet intercept. It garnered over a million views merely within the first few hours of release, showing how hot tensions are running among each side’s population:

…Beijing launched a treaty-banned and highly destructive missile into the South China Sea Wednesday morning in a sharp message to Washington, the South China Morning Post reported. The DF-26B missile, known as an “aircraft-carrier killer,” can be deployed with nuclear attachment in both land and naval capacities. Such missiles are banned under the Intermediate-Range Nuclear Forces…

“Capable Of Hitting Targets In Space”: Russia Kicks Off Final Testing Of S-500 ‘Prometheus’ System Tyler Durden Mon, 08/24/2020 – 23:45 The Pentagon and US intelligence community will be closely observing Russia’s most advanced anti-air missile system as it enters state trials before eventually being delivered to Russia’s military. The cutting edge system, nicknamed Prometheus (and formally […]

… The 500kg precision-guided munitions dispenser and the air-to-surface missile has wings and a square cross-section to hold submunitions, which can also reduce its radar cross-section to boost its stealth capability and make it harder to intercept, according to the report.

Its wings can provide extra lift and give the weapon a range of more than 60km (37 miles), meaning it can be dropped at a safe distance from the enemy. Tianlei or Sky Thunder is designed and manufactured by China North Industries Group, or Norinco.

“It can carry up to 240 submunitions. And when dispersed, they can spread to over 6,000 square metres,” said the engineer, who was not identified in the report.

…All trainings are of a defensive nature and take place away from the conflict zone in eastern Ukraine, it said. Operation ORBITAL in brief In 2015, the UK established a training mission, Operation ORBITAL, in response to a request from the Government of Ukraine. In 2018, the UK expanded the scope of Operation Orbital to deliver training to the Ukrainian Navy and Marines, who face increasing threats in the Black Sea and Sea of Azov. In 2019, the UK extended the mission, for another three years, until March 2023.

Are cracks appearing in Russia-China ties after the People’s Liberation
Army’s border skirmishes with India and an espionage case involving a
senior Russian official?

Friday, July 24, 2020
Russian newest S-400 air defense systems, acquired by China several years ago, were left without anti-aircraft guided missiles because Russia decided to stop supplying these weapons to China, reports
the Chinese newspaper Sohu. The Russian side could not name the timing for the resumption of deliveries. It has been almost five months since the supplies have stopped.
…

Catastrophic damages to cities from small nuiclear and non-nuclear explosions.

Damages to cities and human lives are frightening even from explosions of less than that caused by the nuclear bomb dropped on Hiroshima, that was equivalent to 16000 ton of TNT. The levels of damage from smaller explosions are obtained from accidents caused by chemical explosions of known quantity.

The levels of well known damages are listed here in descending order: 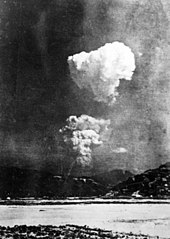 Newly-discovered photo of the bombing of Hiroshima

For decades this “Hiroshima strike” photo was misidentified as the mushroom cloud of the bomb that formed at c. 08:16. However, due to its much greater height, the scene was identified by a researcher in March 2016 as the firestorm-cloud that engulfed the city, a fire that reached its peak intensity some three hours after the bomb.

Hiroshima in the aftermath of the bombing. 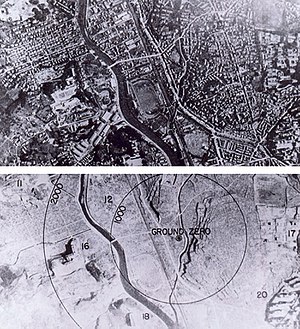 Nagasaki before and after the bombing and the fires had long since burnt out.

The explosion was caused by fire on 2750 ton of ammonium nitrate (approx. 1000 tonnes TNT equivalent).

The first two explosions occurred within 30 seconds of each other at the facility. The second explosion was far larger and involved the detonation of about 800 tonnes of ammonium nitrate (approx. 256 tonnes TNT equivalent). 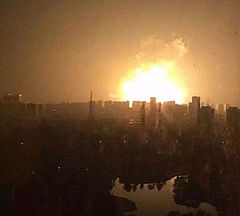 Fireball from the first explosion

Fires caused by the initial explosions continued to burn uncontrolled throughout the weekend, resulting in eight additional explosions on 15
August.