…The Israel Defense Forces (IDF) was allocated some nine billion shekels
($2.9 billion) to prepare for a possible attack on Iran, Haaretz reported on Wednesday…

Newly leaked Hillary Clinton emails reveal that the former Secretary of State suspected that biological weapons were being created at the Wuhan Institute of Virology.

The cables were sent to all embassies in member nations ahead of the Australia Group plenary session in Paris in September 2009.

Infowars.com reports: The Australia Group is an “informal” international export control forum created to prevent the spread of technologies and research that could contribute to the development of chemical and biological weapons.

“We believe it is important to focus on emerging chemical and biological technologies, trends in the trade of CBW-related goods, and threats,” former Secretary Clinton stated.

Directed to France, the email continues: “The U.S. believes participants would benefit from hearing about your experiences assisting China in setting up a Biosafety Level-4 (BSL-4) laboratory at the Wuhan Institute of Virology from the export control and intangible technology transfer perspectives.”

“We are particularly interested to know how China plans to vet incoming foreign researchers from countries of biological weapons proliferation concern,” Clinton added.

The U.S. believes AG members would be interested in any information you can share related to China and North Korea, specifically information related to:

– China’s Institutes of Biological Products (locations in Beijing and Wuhan), to include overhead imagery analysis, if possible.

– Your perceptions of the CBW proliferation activities by Chinese entities.

– Your perceptions of Chinese government efforts to enforce its export control rules.

Hillary concludes the cable by signing CLINTON at the bottom.

42 nations are part of the Australia Group, including the Five Eyes nations of Canada, the United Kingdom, New Zealand, the United States, and Australia.

Communist China is notably not part of the group.

Clinton has never spoken publicly about these emails since the outbreak of the COVID pandemic.

In fact, Clinton asserted in March 2021 that claiming SARS-Cov-2 leaked from the Wuhan Institute of Virology was “racist,” blaming them for attacks on Asian-Americans.

This week I spoke to @SenDuckworth about the recent rise in anti-Asian bigotry fueled by Donald Trump’s racist rhetoric, her own experiences with prejudice, and what we can all do to help #StopAsianHate.

Listen to this week’s episode of You and Me Both.https://t.co/GldksXul9Y pic.twitter.com/fCmgTCIpmA

But these emails suggest Clinton knew a great deal more about the Wuhan lab, and did nothing to address its risky research as Secretary of State.

The post Bombshell Emails: Hillary Clinton Knew ‘Biological Weapons’ Were Being Made at Wuhan Lab appeared first on Nwo Report.

…The Global Times picked up on National Security Advisor Jake Sullivan’s statement on Tuesday, in which he said that the US was “going to take every action that we can take, from the point of view of both deterrence and diplomacy”
to prevent a scenario where China takes over Taiwan militarily. The
message was echoed the same day by Secretary of State Antony Blinken,
who warned China that a military scenario vis-a-vis Taiwan would be a “very serious mistake.”…

Only a few days ago, the UN Secretary General made sure that the International Day of Solidarity with the Palestinian People did not infringe on Israel’s colonial existence. So how can the US ambassador claim that the UN is denying Israel’s right to exist, when the two-state framework and the 1947 Partition Plan endorsed colonialism in Palestine and has protected it ever since?

The UN’s “unfair” focus on Israel is favourable to the settler-colonial enterprise. Its alleged unfairness has generated unrivalled impunity for Israel, while Palestinians have been begging for their political rights for decades to no avail. While Israel is recognised, endorsed and supported, Palestinians have lost so much territory that recognition of a Palestinian state renders no tangible benefits in terms of state-building. The “unfair focus” to which Thomas-Greenfield refers has allowed a colonial settlement project – with war crimes, as the International Criminal Court determined – to continue without any punitive measures, while Palestinians remain stuck in a perpetual cycle of dispossession. “Unfair focus” has also prioritised Israel’s existence over the Palestinian right of return, which the international community has long since written off as unfeasible and worthy only as a symbolic gesture, as opposed to a necessary political reckoning…

China has accused the Philippines of breaching its territory,
saying two supply ships were blocked by Beijing’s coast guard as they
approached a disputed shoal. Manila protested over the run-in, citing
its own claim to the area.
The two Philippines vessels “trespassed”
into waters near the Nansha island chain – also known as the Spratly
Islands – on November 16, Foreign Ministry spokesman Zhao Lijan told reporters on Friday, noting that they entered the area “without China’s consent.”

“Chinese
coast guard vessels performed official duties in accordance with law
and upheld China’s territorial sovereignty and maritime order,” Zhao said, adding that the area is now “generally tranquil” and that the two countries are in communication about the encounter. 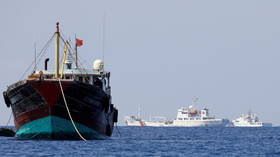 Philippines accuses China of using water cannon against its ships

The comments from Beijing come just one day after Manila first
publicized the incident, with the Philippines Foreign Affairs Secretary
Teodoro Locsin claiming Chinese vessels fired water cannon on the two
supply boats and forced them to abandon their mission near a disputed
shoal in the Spratlys. He called on China to “back off” and “take heed” of Philippines claims to the region.

While
both countries regard the Ayungin shoal – alternatively referred to as
the Second Thomas or Renai Jiao shoal – as their own territory, The
Hague’s Permanent Court of Arbitration settled
the dispute in the Philippines’ favor in 2016. However, despite that
ruling, as well as the fact that Manila has maintained a presence on the
shoal since 1999, Beijing has not abandoned its claims to the area.

Belarus’s threat to cut off
gas supplies to Europe would be a breach of contract with Russia,
President Vladimir Putin has warned…

The US military covered up an attack that killed dozens of civilians in Syria, according to an investigation by the New York Times newspaper.

The 2019 attack on so-called Islamic State (IS) fighters killed 80 people – only 16 identified as militants.

Comment by tonytran2015: Two nations on the same territory is clearly a fraud. A fraud is never sustainable.

Israel opposes the plan of US President Joe Biden’s
administration to re-open America’s consulate for Palestinians in
Jerusalem, Prime Minister Naftali Bennet has said.
“We made it clear to them [the US],” Bennet said, answering journalist
Amichai Stein’s question during a press conference on Saturday. Both
Bennet and Israeli Foreign Minister Yair Lapid repeated the same
strongly-worded phrase, the reporter of the Israeli Kan TV has tweeted.

Trump
controversially moved the US embassy from Tel Aviv to Jerusalem and the
consulate that served as America’s de facto embassy to the Palestinians
was incorporated into the embassy as the Palestinian Affairs Unit. The
move drew the ire of Palestinians, who view East Jerusalem as the
capital of a future Palestinian state.

Giving the occupied East
Jerusalem back to the Palestinians has repeatedly been suggested as a
part of a two-state solution to the simmering conflict, but the
right-wing Israeli government has apparently ruled out the possibility
of such a deal.

Jerusalem is “the capital of the State of Israel only,” Bennet told Stein on Saturday.

The
Palestinian consulate was closed in 2019 under former President Donald
Trump, and the Israeli government has resisted Biden’s plans to re-open
it for quite some time. When Biden took over the White House, one of the
first moves announced by his administration was the facility’s
reopening.

The news did not sit well with Tel Aviv. In early September, Lapid called it a “bad idea” that, he said, would send a wrong signal to the Palestinians and the international community.

Bennet suggested opening the consulate somewhere outside
Jerusalem, such as in the West Bank city of Ramallah or the town of Abu
Dis to the east of Jerusalem, when the prime minister met with Biden in
late August. The US administration has rejected those suggestions,
according to the Israeli media.

It is unclear, however, if Washington would be able to move
forward with its plans without Tel Aviv’s consent. The US would need
Israel’s approval to open the consulate, the US State Department
admitted in October.

“That is my understanding — that we need the consent of the host government to open any diplomatic facility,” Deputy Secretary of State for Management and Resources Brian McKeon told the US Senate Committee on Foreign Relations.