… Mr Biden had suggested that a “minor” attack might bring a weaker response from the US and its allies.

But Mr Zelensky tweeted: “There are no minor incursions. Just as there are
no minor casualties and little grief from the loss of loved ones.” …

…Britain is supplying Ukraine with short-range anti-tank missiles for self-defence after Russia
amassed about 100,000 troops on its border, the defence secretary said.

…According to Borrell, this is the first time the Russian side has put its agenda in writing, something which he claims “only winners” have the right to do. The EU diplomat dismissed Moscow’s call for security guarantees and dubbed the proposed ideas as a “purely Russian agenda” with “completely unacceptable conditions,” especially with regard to Ukraine…

…The Israel Defense Forces (IDF) was allocated some nine billion shekels
($2.9 billion) to prepare for a possible attack on Iran, Haaretz reported on Wednesday…

…A military official in Tehran has warned that aggressors will pay a
“heavy price” in response to numerous reports that Israel was seeking US help, or at least approval, in preparing potential strikes on Iranian nuclear sites…

… Three ships from the Chinese coastguard blocked and fired water cannons
on two Philippines supply boats within the country’s exclusive economic
zone (EEZ) in the disputed South China Sea, the Philippines has said… 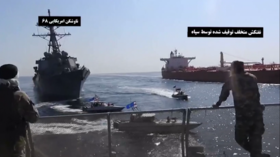 © Ruptly
Iran’s state media has published footage of a major incident in
the Gulf of Oman, in which Tehran’s forces said they “foiled” the
seizure of an oil tanker by the US as Washington looked to enforce its
ban on Iranian oil exports.
On Wednesday, Iranian
state media reported that units of the Islamic Revolutionary Guards
Corps (IRGC) were forced to respond to an incident in the Gulf of Oman
in which American forces attempted to seize the Vietnamese-flagged oil
tanker Sothys. The government quickly confirmed the reports, noting that the events had taken place in late October.

Footage
released shortly after shows the moment Iranian forces reached the
tanker. A helicopter is used to transport IRGC troops to the vessel,
while Iran’s famed military speedboats can be seen attempting to block
the path of US warships.

On Wednesday, however, the US rejected Iran’s claims as “totally false and untrue.” American officials claim Iran seized the Vietnamese tanker last month and its warships were simply observing the situation. “The only seizing that was done was by Iran,” Pentagon Spokesman John Kirby told reporters.

Despite
being dwarfed by the US vessels, the Iranian forces appear to
successfully block the path of America’s warships as the tanker sails
away. In multiple shots, IRGC soldiers can be seen training their
weaponry at the American vessels.

Despite
claiming a successful operation, the Iranian government said on
Wednesday that the US had transferred oil from the tanker onto another
vessel. The location of that other vessel was unknown, it said.

Iran’s
oil exports were banned by the US as part of the crippling series of
sanctions imposed on Tehran following former President Donald Trump’s
unilateral decision to abandon the 2015 nuclear pact, which had put
constraints on Iran’s atomic ambitions. Any country that purchases
Iranian oil will also face the threat of sanctions.

Also on rt.com
Iranian military ‘foils’ US attempt to seize tanker in Sea of Oman

Iran has said it will continue exporting oil – a vital source of
revenue for the government – regardless of the sanctions. Wednesday’s
events are not the first time the US has intercepted vessels carrying
Iranian oil.

Comment by tonytran2015: China has been successful in its aggressions against most of its neighbours. China may soon invade Taiwan with overwhelming force in the same way as it has done to Tibet, Mongolia, Vietnam, the Philippines, …

Nobody in the US really knows for certain what the intentions and plans are of the Chinese government. Which makes it a good idea to keep a close eye on what it does. From Judith Bergman at gatestoneinstitute.org:

Tensions continue to rise in the South China Sea, as China, or, rightly, the Chinese Communist Party (CCP), ramps up its military activities in the region. Within only the first four days of October, China conducted a record-breaking 150 incursionsinto Taiwan’s air defense identification zone (ADIZ) — after China’s People Liberation Army Air Force (PLAAF) had already, in September, set another monthly record with 117 incursions, some with nuclear-capable bombers, fighter jets and reconnaissance planes. The incursions were reportedly the highest monthly number on record since Taiwan’s Ministry of National Defense began reporting Chinese aerial incursions 13 months ago. In addition, in August, the first-ever incursionof Chinese military helicopters into Taiwan’s ADIZ took place, with experts suggesting that the PLA was probing Taiwanese defense capabilities by using different aircraft.

Also in August and September, China conducted assault drills near Taiwan with war ships, early-warning aircraft, anti-submarine aircraft and bombers. “The joint fire assault and other drills staged by the Eastern Theater Command troops are a necessary action to further safeguard China’s sovereignty under the current security situation in the Taiwan Straits,” Colonel Shi Yi, spokesperson for the PLA Eastern Theater Command said, “and also a solemn response to the interference of foreign forces and the provocation of ‘Taiwan independence’ secessionists.” Shi stated that military exercises would be “conducted regularly” based on the situation in the Taiwan Strait and the “need to maintain sovereign security”. China has conducted 20 naval island-control exercises in the first half of 2021, compared to 13 in all of 2020.

This activity — in addition to diplomatic and economic pressure — is evidently meant to exhaust Taiwan, force it to capitulate to China and relinquish its independence without China firing a shot. “China is pursuing an all-of-party approach that seeks to coerce, corrupt and co-opt the international community,” former commander of the U.S. Indo-Pacific Command, Philip Davidson, recently warned, “in a way in which they may be able to achieve their geopolitical edge… to force Taiwan to capitulate because of extreme, diplomatic, economic, pressure and strain”. Failing that coercion, Davidson estimates:

“the changes in the [People’s Liberation Army]’s capabilities, with their missile and cyber forces, and their ability to train, advance their joint interoperability and their combat support logistics, all those trend lines indicate to me that within the next six years they will have the capability and the capacity to forcibly reunify with Taiwan, should they choose force to do it.”

Comment by tonytran2015: This is an old tactics. If Taiwan and its allies show any gap in its defence, China may launch a surprise overwhelming attack, leaving the Western World looking at an already done event.