HBO late night host Bill Maher excoriated The New York Times over its decision to “bury” the story of a radical leftist would-be assassin who was arrested outside the home of Supreme Court Justice Brett Kavanaugh this week.

On his Friday show “Real Time,” Maher noted that Senate Majority Leader Chuck Schumer (D) made “inflammatory” remarks which could be interpreted as a call to violence against conservative Supreme Court justices.

The New York Times openly “buried” the story of the California man who vowed to murder Justice Kavanaugh, Maher added, knowing full well the newspaper would have plastered the story on the front page had the target been a liberal justice.

Trending: Is This What You Had In Mind, America?

“OK, and they stopped him. OK? But he was, he’s from California, Chuck Schumer said some very inflammatory words, the kind of thing that people on the right to say and there’s a horrible shooting and they blame it is rather comparable. And Chuck Schumer did walk it back. Nobody on the right ever does that. He did. I saw this, he did. He said, ‘We’re from Brooklyn. We speak too strongly.’ He said something about how they were talking about,” Maher said Friday

A Texas official has admitted mistakes during the Uvalde school massacre and says children had repeatedly called 911 asking for help, including one who pleaded: “Please send the police now.”

Comment by tonytran2015: Why don’t schools have security? It is sad but every system has its own risks and risks and benefits are always traded off.

…One mother told the Wall Street Journal
that she was briefly handcuffed, accused of impeding a police
investigation, after demanding along with other parents that officers
storm the building. Angeli Rose Gomez said she saw one frantic father
thrown to the ground by an officer, another father pepper-sprayed and a
third who was later tased…

Moldovan Parliament Speaker Igor Grosu has
addressed recent statements by Russian Foreign Ministry Spokeswoman
Maria Zakharova, who complained that Russian diplomats in Chisinau could
not work properly due to protests outside the embassy.
This was reported by point.md, according to Ukrinform.

“I appeal to all diplomatic missions. Diplomats, get used to the fact
that citizens in Moldova have the right to protest. Get used to the
fact that in Moldova, any citizen can protest in front of parliament,
government, president, and even an embassy. This is very important. If
this is not possible in your country, be aware that anyone in Moldova
can do it,” Grosso said.

Earlier, Zakharova complained that due to continued protests outside
the Russian Embassy in Chisinau, the embassy “can’t work properly.”

“Anti-Russian demonstrations take place every day for two months due
to inaction of Moldovan authorities. These protests affect operations of
the diplomatic mission,” Zakharova claimed.

A Syrian military bus was attacked on Friday, which killed 12 soldiers and wounded 14, between the towns of Nubl and Al Zahra, west of Aleppo at 9:30 am. The attack was carried out by the Turkish sponsored ‘Sultan Shah’ terrorist group, which used a TOW anti-tank rocket. The Obama administration, by act of the US Congress, sent the Radical Islamic terrorists based in northwest Syria the US made TOW anti-tank missiles.

The Al Qaeda branch in Syria, Hayat Tahrir al-Sham (HTS), formerly known as Jibhat al Nusra, posted a video on its Telegram channel on Friday showing a rocket hitting the bus. HTS is in control of Idlib, which is the last terrorist controlled area in Syria.

In 2017, President Trump shut down the CIA program which was funding and providing weapons to the Radical Islamic terrorists fighting to over throw the Syrian government to establish an Islamic State in Syria. President Obama had devised the war on Syria for regime change while utilizing Radical Islamic terrorists from Syria and around the world, including the US, UK, France, Belgium, and Australia.

Defense attorneys are seeking to identify and investigate 80 suspicious actors and material witnesses, some of whom allegedly ran an entrapment operation against the Oath Keepers on January 6, 2021, and committed crimes including the removal of security fencing, breaching police lines, attacking officers, and inciting crowds to storm into the Capitol.

In a motion … filed after 11 p.m. on May 5 in federal court in Washington, attorney Brad Geyer listed 80 people, some of whom he said could be government agents or provocateurs. The people are seen on video operating in a coordinated fashion across the Capitol grounds on January 6, the attorney alleged. … Video evidence the defense gained access to only recently shows that some of the 80 people attacked police, other people, and members of the Oath Keepers; entered the Capitol on the west side “with apparent permission or acquiescence of government actors”; opened the Columbus Doors on the east side of the Capitol “from the inside, possibly with even further assistance of government actors”; and deployed “sophisticated crowd-behavior techniques,” orienting themselves between protesters and police. Suspicious actors are seen on video “associating, conferring and traveling with others, engaging in behavior to confuse law enforcement through body masking, facial masking, clothing changes, and disorienting skirmishing behavior,” Geyer wrote. The suspected people used earpieces, satellite phones, and other communication equipment. “Often it appears that these communications devices do not seem to be affected by capacity restriction or sophisticated jamming that was evident throughout the day,” Geyer wrote. “If it can be established that these SAs [suspicious actors] were government agents, this could amount to entrapment defense that will dispose of this 7th indictment prior to trial,” the motion said. … Geyer suggested the Oath Keepers who entered the Capitol Rotunda through the famous Columbus Doors atop the east stairs were entrapped by suspicious actors who boxed them in and attempted to push them into the Capitol after the doors were opened from the inside. … Video shot by a French television crew, and surveillance footage under court seal raise “significant concerns of informants, influencers, and inciters whose activities are now clearly observable,” said a footnote in the motion. …

Videos referenced in Geyer’s motion show that the 17-foot-high, 20,000-pound bronze Columbus Doors were closed when the crowd gathered at the bottom of the steps and then breached the police line. When the crowd reached the top, the fortress-like doors were still shut. It’s not clear when, or why, the doors were opened. 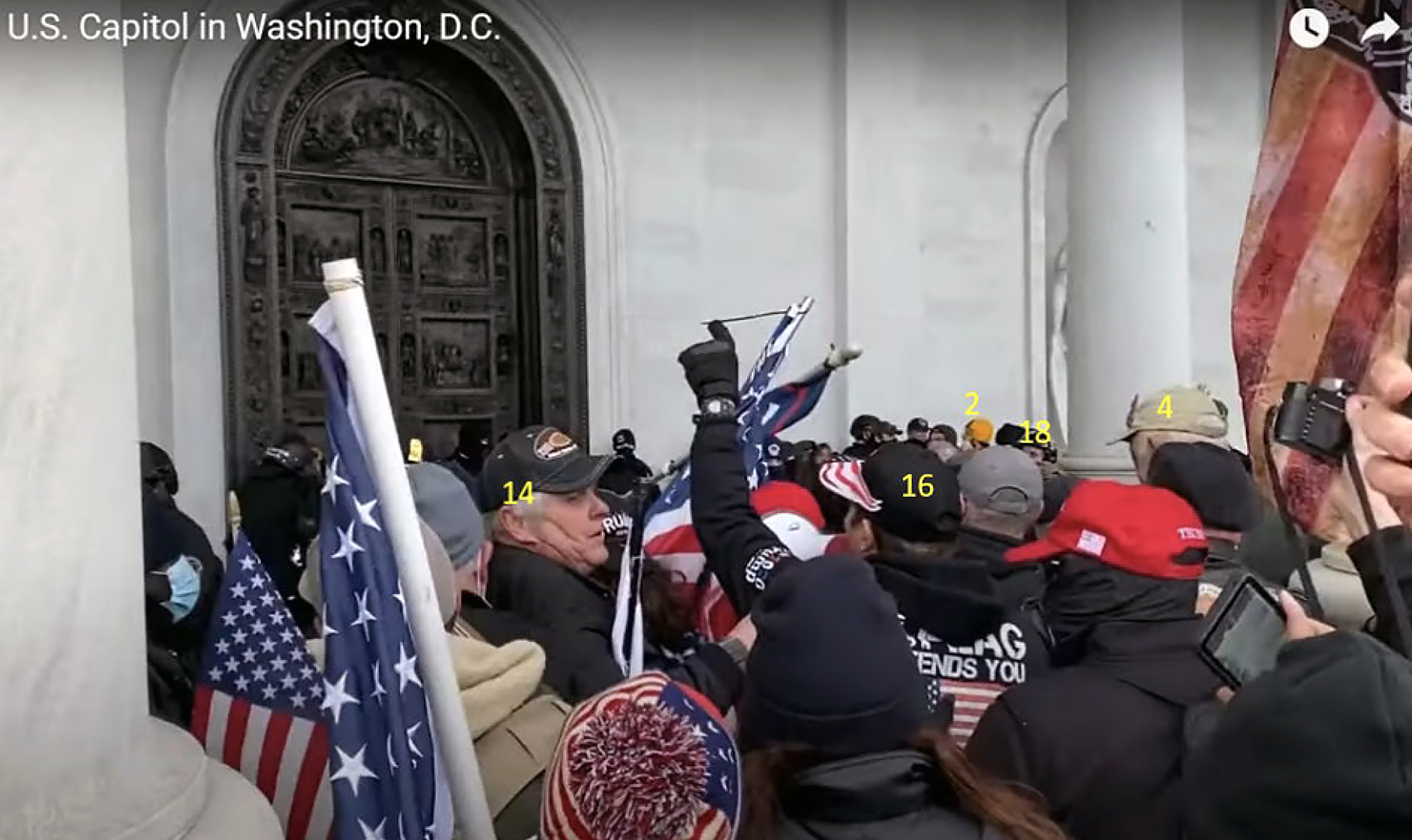 That significant revelation backs up arguments made in January by attorney Jonathon Moseley, who told prosecutors his client, Kelly Meggs, could not have breached the doors because they are controlled from inside the Capitol. “The outer doors cast from solid bronze would require a bazooka, an artillery shell, or C4 military-grade explosives to breach,” Moseley wrote in a letter to federal prosecutors. “That of course did not happen. You would sooner break into a bank vault than to break the bronze outer Columbus Doors.” … The two inner doors are secured by magnetic locks and cannot be opened from the outside. Twice within an hour on January 6, suspicious actors opened the inner doors from inside the Rotunda, surveillance video shows. According to Geyer’s filing, a large number of suspicious actors controlled the scene directly in front of the Columbus Doors after the giant doors were opened. They chased away regular protesters with pepper spray and moved other actors into place. The Oath Keepers, each of whom was shadowed by at least one suspicious actor, were positioned and coaxed toward the entrance. Six to eight suspicious actors attacked police with mace in preparation to breach the entrance, Geyer wrote. …

The Jan 6 Capitol riot is increasingly looking like a modern Reichstag fire. Coming after the Russia hoax (which turned out to be completely made up by the Clinton camp, but which dominated politics for three years and hamstrung Trump) and the Governor Whitmer kidnapping acquittals (because the incident was just FBI entrapment), a Capitol riot organized by the FBI would appear to be just standard operating procedure. Remember, the sole effect of the riot that day was to cancel the two hour debate on election shenanigans scheduled for that date. The election college voting on the President went ahead as scheduled. And of course since then we have the whole MAGA-are-terrorists vibe that the Democrats are trying on. 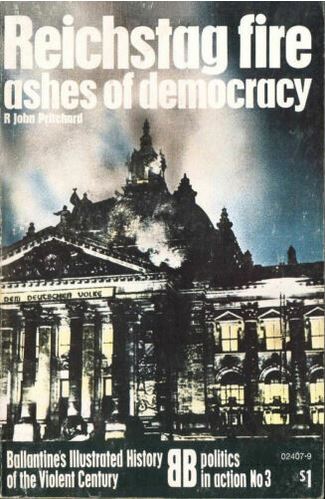 Comment by tonytran2015: This case looks like the death of Seith Rich. Ordinary people should keep away from FBI, CIA, Democratic National Convention, …

A federal informant who turned over documents in an investigation into Trump’s relationship with Deutsche Bank was found dead in Los Angeles on Monday after he went missing last year.

Valentin Broeksmit, 46, was reported missing last year, according to LAPD.

…
The cause of death is unclear but authorities say foul play is not suspected.