…Spokesman Zabiullah Mujaheed said: “We are aware of the incident and I am confirming that the Taliban have not killed her, our investigation is
ongoing.”

He added that the Taliban had already announced an amnesty for people who
worked for the previous administration, …

Iraqi Prime Minister Mustafa Al-Kadhimi claims that the
government knows who was responsible for the reported drone attack
against his residence, and will expose them.
“We will pursue those who committed yesterday’s crime. We know them well and we will expose them,” al-Kadhimi said in a statement from his office on Sunday, as cited by Reuters.

The prime minister stopped short of revealing the identities of the alleged perpetrators. 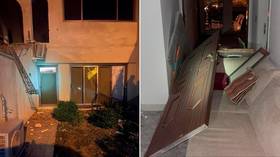 Al-Kadhimi was not hurt in the incident, and he released a statement shortly afterwards, calling for “calm and restraint from everyone” for “the sake of Iraq.”

The
reported attack followed Friday’s chaotic protests in Baghdad.
Demonstrators protested October’s parliamentary election results, in
which pro-Iranian Shia parties suffered heavy losses, and many alleged
voter fraud and called for a recount. Over 100 people were injured as
protesters clashed with police and attempted to storm the Green Zone.
Several demonstrators were allegedly killed in the unrest. Al-Kadhimi
ordered an investigation into the violence.

The US government has offered to help investigate the reported attack on the prime minister’s residence, and “strongly condemned” the “apparent act of terrorism.” Iran has claimed that “foreign think tanks” might have orchestrated the attack to destabilize the already fragile situation in the country.

Several people have been killed by a bombing at a mosque in the Afghan capital Kabul, the Taliban have said.

#AceNewsReport – Aug.31: Sabeel Ahmed, a former NHS doctor, was arrested following the June 2007 attack and sentenced to 18 months in prison in the UK after pleading guilty to failing to disclose information that could have prevented an act of terrorism: He was then deported to India after his release….

The question of who shot and killed US Air Force veteran Ashli Babbitt remains unanswered, and as time goes on, more people are demanding answers. Rep. Devin Nunes (R-CA) has called for answers about who killed Ashli and has requested the videotape from the day of the shooting at the Capitol.

Rep. Devin Nunes called for answers: The family has now filed a lawsuit. And with any normal circumstance where you have an officer-involved shooting, you have people who go out there and say, “Where’s the videotape? Where’s the videotape? We need to know what officer did this… Why are we living under a different set of rules? I think that’s what the Babbit family is asking, and I agree with them. We should know who the shooter is… House Republicans still have not seen the videotapes. There are reportedly 14,000 hours of videotapes from inside the Capitol. Why is that? Why do we not have that? Why do we not have an accounting of the dozens of people who broke the windows versus the people who just walked in openly because the Capitol police let them in?

The lawsuit asks for all video footage of the shooting at the Capitol on January 6th and witness statements and documents gathered during an investigation into her death. The Department of Justice decided not to pursue criminal charges against the police officer responsible in mid-April.

Department officials said at the time; an investigation found he was likely acting in self-defense as Babbitt crawled through a window.

The family of Ashli Babbitt is also pursuing another lawsuit against the Metropolitan Police Department, claiming he used excessive force. They are asking for more than $10 million in that lawsuit.

Now, it’s being reported that after an “internal investigation,” the Capitol cop that murdered the unarmed veteran has been exonerated.

The Daily Mail reports- The commander of the Capitol Police’s Office of Personal Responsibility says ‘no further action will be taken in this matter,’ according to a memo obtained by NBC News.

In April, the Department of Justice said it wouldn’t be filing charges against the officer, so the conclusion of the internal probe ends the official investigation.

The family’s lawyer, Terry Roberts, alluded to a video of the Air Force veteran being shot and said the fact that no one appears to be ducking for cover in the moments before Babbitt was killed also suggests that the cop gave no verbal warning.

The cop’s lawyer denied this in previous interviews and said his client issued multiple verbal commands but that they weren’t audible on the video because he was wearing a mask.

Hmmm…does that mean all future “accidental” shootings of unarmed Americans will be excused if the cop was wearing a face covering and couldn’t be heard on his bodycam yelling, “I’m going to shoot you!”???

A third DC Metropolitan Police officer who was at the Capitol riot on January 6 has taken his own life. 43-year-old Gunther Hashida committed suicide on July 29, his family announced on GoFundMe. “On July 29, 2021, we lost Gunther Hashida, who leaves behind a loving wife, sister, 3 children, and a wonderful family. In…

Source: Third DC Metro Police Officer Who Was at Capitol on January 6 Dies by Suicide

…Vitaly Shishov’s body was found hanged in a park in Kyiv, a day after he
failed to return from a jog. Police have opened a murder inquiry…

The death of paedophile Jeffrey Epstein denied his victims
justice and left Ghislaine Maxwell as keeper of his darkest secrets. But
a new book investigating the case suggests her trial shouldn’t be the
end of this sordid story.
When the trial of
Ghislaine Maxwell over her alleged complicity in trafficking teenage
girls for sex with dead paedophile Jeffrey Epstein eventually draws to a
conclusion, it is unlikely to be the end of this sordid, salacious
saga.

Thanks to the mass of journalistic grunt work carried out by
Miami Herald investigative reporter, Julie K Brown, and rigorously
documented in her recently published ‘Perversion of Justice’,
the recriminations will continue, law officials will continue to look
over their shoulders and the victims will edge ever closer to closure,
of sorts.

Because justice will elude the 34 women who have stayed
the distance as legal proceedings against the disgraced financier
dragged on, and were then ultimately derailed, when Epstein apparently
chose the coward’s exit rather than face his accusers and hung himself
with his bedsheets in his prison cell in the Special Housing Unit of New
York’s Metropolitan Correctional Centre in August 2019.

While no
one openly mourns the death of a sex monster, Epstein’s ranks of lawyers
have attempted to paint his death as some sort of miscarriage of
justice and Brown does take a close look at the circumstances
surrounding it and comes up with… well, nothing certain.

The
security cameras monitoring Epstein’s prison cell were on the blink at
the time of his death, the two guards supposedly keeping watch over him –
following one earlier unsuccessful attempt at suicide – were both found
fast asleep on the job, and it was clearly documented that their charge
was ill-suited to the harsh realities of prison life.

Brown also
suggests that selecting Nicholas Tartaglione, a former upstate New York
police officer facing quadruple murder charges, to be the bunkmate of
Epstein, following his 2019 arrest on federal charges of sex trafficking
minors, might have been considered a bit more carefully.

But,
frankly, any attempt to garner sympathy for the loathsome billionaire is
hard to stomach, no matter how or at whose hands he finally shuffled
off this mortal coil.

Anyone who has followed this story will see parallels in the way
that Maxwell’s legal team is behaving in the run-up to her trial. Ever
since her arrest, smarmy, disingenuous, top-flight lawyers have been
trying to weasel bail, better prison conditions and more lenient
treatment for their client, even enlisting the help of her brother to claim she was being kept in conditions as bad as those in the USA’s notorious rendition prison in Guantanamo Bay.

In
the pleas to the court to go easy on Maxwell, there is never any
mention of the countless lives of pretty young teenagers that were
destroyed by cynical manipulation to coerce them into having sex with
Epstein and his rich powerful pals, before they were discarded like the
soiled towels the pervert would use three or four times a day after
assaulting his latest ‘private masseuse.’

While Maxwell’s trial
should certainly be a significant step forward in reaching closure on
this case, and the total of $67million paid out in compensation to some
of his victims also helps, after reading ‘Perversion of Justice’ you
can’t help feel there is substantially more to be revealed, that, were
it to be made public, would rupture the US political and legal
establishment.

In one instance that Brown explores, it’s surely
significant that no one has been able to extract from bureaucracy the
unredacted flight manifests of Epstein’s private jet trips down to his
personal slice of the Caribbean, dubbed ‘Paedophile Island.’ Rumours
abound, meanwhile, about the identities of the rich and powerful men who
accompanied the financier on his jaunts to the island of Little St
James, along with the many teenage girls, for sordid sex in the sun away
from prying eyes.

While money and power shield many of those who
embraced Epstein’s hospitality, 59-year-old Maxwell’s pending trial
could identify some of those accomplices who would much prefer they were
never mentioned. This might prompt some of those unnamed former
associates of Epstein into working on Maxwell’s behalf, calling in
favours from powerful friends behind the scenes, attempting to coerce
prosecutors and police and enlisting private investigators to dig up
information that might deter her inquisitors from taking too close a
look at all the details. Obviously, a carefully worded plea bargain
would be in all their interests.

Because that’s how Epstein worked
and Maxwell, without question, learned a lot from her former boyfriend.
Of course, that would mean the search for truth would again be stymied.

What
does offer hope is that the political and legal landscape in the States
has changed since Donald Trump, a long-time pal of Epstein, left office
and the more ‘colourful’ members of an inter-connected band of
high-rolling lawyers, politicos and influence peddlers scattered in the
wind. Some of the creepier rockspiders themselves have been arrested,
charged and jailed for various misdemeanours while others have quietly
scuttled off, hoping no one notices.

Talk about the wider trafficking network that Epstein established seems to have gone quiet, particularly since the arrest of French modelling agent Jean-Luc Brunel over rape and sexual assault charges.

If
that is true, then maybe justice of sorts can be found. Maybe Maxwell
has no cards left to play and will spend the next few decades behind
bars and Epstein’s victims, like Virginia Giuffre and Courtney Wild, can
carry on with rich and fulfilling lives.

Or maybe something
darker will emerge and Epstein’s crimes will become Maxwell’s crimes and
the crimes of others. One thing is certain: only when the fallen
socialite steps into the courtroom on November 29, will we even begin to know if we are anywhere near the end of this shameful perversion of justice.

The
prominent Dutch crime reporter Peter R de Vries, who was shot and
seriously wounded in central Amsterdam nine days ago, has died.

The shooting shocked the Netherlands, where Mr de Vries was well-known for
his investigations of mobsters and drug lords. Two suspects were
arrested.