People’s Convoy co-organizer Maureen Steele says truckers have been hit hard by COVID-19 mandates and the protesters “want accountability” for the government’s actions during the pandemic.

The People’s Convoy, inspired by the Canadian Freedom Convoy, plans to be in Washington, D.C., by March 5.

The truckers in the protest are looking to restore freedom and liberty, Steele told “Just the News, Not Noise” cohosts John Solomon and Amanda Head.

TRENDING: The Fall of Canada, The Danger in the U.S.

“We want accountability for what happened over the last two years,” said Steele, calling the pandemic’s fallout “devastating.”

Some truckers have lost their jobs due to COVID vaccine mandates, Steele reported.

“They’re still willing to go out on the road, and cross the country, for our freedom,” Steele said. “And it’s so typical of all of America, the blue-collar boys stepping up first.

Steele called the People’s Convoy a “slice of Americana,” explaining that “people from every walk of life” have joined the protest.

More than $200,000 has been raised in support of the People’s Convoy, according to its website. Steele said the group learned from the Canadian convoy and is taking precautions to ensure it can use the donations.

Canadian Prime Minister Justin Trudeau used the Emergencies Act to direct “banks to freeze the accounts of those involved in the convoy and cease providing financial services where the institution suspects that an account, either personal or corporate, is being used to further the protest,” as Just the News reported. Crowdfunding platform GoFundMe also froze the Canadian protest’s fundraiser.

“We’ve taken every precaution that we can to ensure that that doesn’t happen here,” Steele said.

The People’s Convoy is working with attorneys and sweeping the donation account “a couple of times a day” to put the money in a private bank, Steele said.

“We cannot have what’s happening in Canada happen here, and it absolutely could,” she said. “We need to dial [mandates] back.”

In order to fight false messaging that the media may create around the People’s Convoy, Steele said “just having cameras there” helps.

Steele mentioned the support she has received from the Democratic-controlled state of New Mexico.

“Anyone that says this is a Republican movement, or it’s a political movement, this absolutely is not — this is a freedom movement,” she said. “It doesn’t matter what side of the aisle you’re on, every American can gather under the banner of freedom.” …

Two cases of the new Omicron coronavirus variant have been
detected in Bavaria, Germany. The UK and Italy are among other European
nations that have also registered instances of the suspected Covid
mutation.
Bavaria’s health ministry
announced late on Saturday that the new strain had been detected in
Germany. Two travelers who arrived at Munich airport on Wednesday tested
positive for Omicron and are now self-isolating. The ministry did not
specify the country from which their flight had originated.
Read more 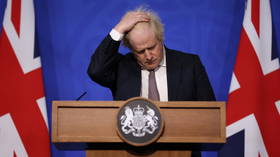 Italy said on Saturday it had registered its first case of the new
strain. Earlier, other European nations, including the Netherlands and
the Czech Republic reported suspected cases of Omicron, but these have
not been confirmed yet. The UK reported discovering two cases of the new
strain, also on Saturday, with the health authorities saying they were
linked to travel from South Africa.

The first-ever cases of the
strain were registered earlier this month in Botswana, with the variant
becoming dominant in southern Africa soon thereafter. The first case on
European soil was detected in Belgium on Friday, when the World Health
Organization (WHO) officially named the new strain, identified as
B.1.1.529, Omicron.

While little is known about it thus far,
experts worldwide have already raised the alarm over its multiple
mutations and potential for infection. On Friday, the European Centre
for Disease Prevention and Control designated the strain as presenting a
“high to very high” risk, adding that there was
“considerable uncertainty related to the transmissibility, vaccine
effectiveness, risk for reinfections and other properties of the Omicron
variant.”

All 27 EU member states suspended air travel from
seven southern African nations the same day. Similar moves have been
taken by the UK, the US and other nations.

Earlier, the World Health Organization (WHO) said it was “very worried” about rising coronavirus cases on the continent…

If you listen to this clip, there is an important revelation here.

PROTESTOR: “Why are you doing this? Policies are killing people.”

POLICE: “I agree with you, I’m just doing my job…I’m just as over this lockdown as you are mate, but this is my job. I’m not skilled to do anything else.”

The significance here is that the cop is saying his wife is out of a job. At some point, even the police will not lay down their lives at the end of the day. However, here he is saying he does not support this tyranny but it’s the only pay he is getting. This sort of tyranny will go only so far. The main ruthless element that will drive police to kill people is that they are told you are evil. As long as you are POSSIBLY guilty of anything, you will deserve death, despite the fact that the immediate event may more justify the punishment.

This sort of attitude is missing in most of these events. If the police are not CONVINCED of your guilt, then they will flip at the end of the day.

More than 2000 protesters shouting anti-vaccination
messages have marched through Melbourne’s CBD, as the construction industry reels from a snap two-week shutdown imposed overnight on Monday.

After marching onto the West Gate Bridge, the protesters turned back into the city and were met by a line of riot police, who appeared to fire tear gas or rubber pellets at the crowd.

https://www.nationandstate.com/2021/09/03/the-economics-of-disaster-capitalism/
Authored by Chris Macintosh via InternationalMan.com, If we look at what is taking place, what seems glaringly obvious to me is that there is a coordinated demolition of entire countries, their business sectors, and with this financial ruin a top-down approach to “fixing” the ruin is being enacted. Step no…

… he allegedly entered the Burwood home of a quarantining woman while posing as an authorised officer last month.

It is alleged he threatened to send the woman into hotel quarantine unless she performed sexual acts.