The United States federal government is apparently in the process of trying to force automakers to install kill switches in their vehicles that authorities can use to shut down any newer vehicle. The law comes as part of President Biden’s infrastructure bill, which was recently signed into law, according to Yahoo…

Thousands of Australians took to the streets of Melbourne to
protest over both a vaccine mandate and a proposed bill which would give
Victoria State Premier Daniel Andrews more power to declare a pandemic
and impose lockdowns.
The large group of protesters, which included children and the elderly, carried Australian flags and marched through Melbourne’s Central Business District on Saturday, calling for the dismissal of their premier with chants of “Sack Dan Andrews!”

Craig
Kelly, a United Australia Party MP for the Division of Hughes, NSW,
took part in the protest and called for the premier powers bill to be
killed. On social media, Kelly wrote that the demonstration stood “against tyranny,” “against dictators,” and “against human rights abusers” in an apparent dig at Andrews.

Saturday’s
protest was just the latest in a string of Melbourne protests since the
beginning of the Covid-19 pandemic, and the latest of several protests
in the city to specifically target the proposed bill. 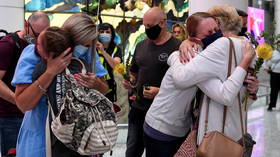 The controversial bill would replace Victoria’s current state of
emergency laws and give more power to the premier to declare a ‘state of
pandemic’ and subsequently implement lockdown restrictions –
circumventing the approval of the chief health officer, who has
traditionally had final say in such declarations.

The bill has received heavy criticism, including from Victoria’s bar association, which expressed “grave concerns” about the proposed legislation and warned that such a bill would give “effectively unlimited power to rule the state by decree” without oversight.

Demonstrators on Saturday also protested against a Victoria vaccine mandate
which came into effect this week and requires construction workers in
the state to be fully vaccinated against Covid-19 to work.

Melbourne
has experienced some of the longest and strictest Covid-19 lockdowns in
the world. Last month, as the city’s sixth lockdown came to an end,
Melbourne’s total number of days in lockdown since the beginning of the
pandemic totalled 262.

Hobsons Bay City Council has put out a ‘Mobile Vendor Policy’ for community consultation.The plan would require food trucks to stay at least 500m from existing businesses and pay a $12,000 annual fee.A long time ice cream van owner says the policy is “extreme and draconian”, while some local traders welcomed the measures.

… Some hopeful folks still move there, but so many more leave that California now loses more than 10,000 citizens every month. In fact, the state will soon lose a congressional seat.

So many Californians move away that there’s now even a shortage of U-Hauls. Renting one to go from Los Angeles to Houston costs four times as much as it does to go from Houston to LA…

But this seems crazy. California has great weather and all kinds of natural advantages.

The state’s politicians drive people away with bad policies…

Once and for all, people, wise up and wake up.

Like the FBI and DHS and FEMA and BATF and IRS, they are three layers down in the layers of unauthorized secondary “federal” subcontractors and they have less than no authority related to you.

It’s like having an employee at Wendy’s Hamburgers come out on the street and demand that you wear a mask because they’ve got the flu. And if you obey that order, then they have reasonable grounds to assume that you owed them that obedience, don’t they?

But as the “government” involved in contracting for services from the CDC and NIH is simply another, larger, foreign, for-profit commercial corporation engaged in the business of providing governmental services, and as there are no provisions allowing any of these bounders to infringe upon our rights and prerogatives in the name of public health — which is not the same as or even part of “public welfare” — they all need to be stood down by the actual people of this country.

You are all playing with phantoms— THINGS like boogey men that don’t actually exist, except on paper— a charter granted to them via the use and too often, the abuse of, your own delegated powers.

Comment by tontran2015: This is the extreme form of governing by deniability.

Professor Sutton was grilled again about his knowledge about the use of private security in hotel quarantine.

He apologised … “If I missed an email, I’m sorry. It hasn’t registered. I get thousands of emails … I was never involved about the decision.” … “I did not have a command control role. And as I said to the inquiry at the time, my public health team were trying to make a case for stronger oversight from the public health team, so I was keen.”

…The Melbourne police have turned into a ruthless anti-Human Rights group of thugs. They are enjoying the ability to simply beat up people arrest them for nonsense. They are setting people up, using checkpoints, and pulling over cars and dragging people from their cars. This is a real live example of how there is no democratic process and you have no rights; whenever the government decides in the name of protecting you, they get to abuse you to maintain their power….

mind-bending pills until you love your government and obey its orders might sound like science fiction. But there are scientists out there who want you to shut up and take your morality pills – by force if necessary.

People, or at least those with a spark of vitality and life in them, don’t like following orders. Months into the coronavirus pandemic, leaders have tried to enforce mandatory social distancing and mask wearing through a mixture of fines, snitching and public shaming. Still, some people refuse to toe the line, from lockdown protesters in the US to cheeky Brits sneaking off for an unlicensed picnic.

The scientific experts, however, have a solution for that. Take Parker Crutchfield, a professor of medical ethics. According to a recent op-ed, he thinks that the ‘ethical’ solution to this rule breaking is to drug the population into compliance, using psychoactive drugs to “induce those who are noncooperative to get on board with doing what’s best for the public good.”

That’s right. A top-of-his-field ethicist at Western Michigan University wants to drug you into cooperation. Should you refuse, he thinks the government should force this “morality booster” on everyone, either by military power, or by administering it in secret, “perhaps via the water supply.”

Crutchfield’s article was retweeted – and later deleted – by the prestigious Johns Hopkins Berman Institute of Bioethics. However, he isn’t the only labcoat who dreams of drugging the proletariat. Late last month, a group of Cambridge academics suggested adding lithium to drinking water to lower suicide rates and mood disorders. Just like Crutchfield, they see this tyranny as serving the greater good.

Strongmen and dictators are reliable bogeymen in the West. After all, the entire origin story of Western liberalism centers around the struggle of the free world against the fascist axis. However, the tyranny of the nerd more often than not goes unnoticed. In some ways, it’s more terrifying than the tyranny of the dictator. When the despot forces you to obey his diktats at gunpoint, the power dynamic is clear. He’s in control. When the bespectacled professor slips morality pills into your water, you won’t even know you’re being dominated.

Throughout the coronavirus pandemic, we’ve repeatedly heard the same refrains from our leaders. “Trust the experts,” they say. “Believe the science.” But scientists – who worship amoral empiricism above all else – see you as little more than a laboratory mouse, an imperfect specimen to be tweaked and molded until the desired result is achieved.

Perhaps that’s why these “experts” are so beloved by liberals. Jean- Jacques Rousseau considered man a “perfectible” creature, a view that would be refined in the 20th century by GWF Hegel, Karl Marx and Leo Strauss, and now underpins most left-wing thought. While religion saw man as trapped in a state of original sin, these leftists saw him as having boundless potential – if only the right scientific tools were used to shape him.

Changing behavior through science is the perfect method for modern liberalism to crush dissent. Doing so by force would invalidate its core tenet: it’s supposed respect for your human rights. Instead, its scientists dream up ways to silence malcontents quietly and peacefully.

Every now and then, an article like Crutchfield’s gives us a glimpse behind the mask.

Chemically rewiring the brains of the population seems far-fetched, but it’s a logical next step when one considers the social engineering projects foisted on the masses at present. From the endless tirades against masculinity, Christianity and the nuclear family one reads in liberal newspapers, to the bizarre push to convert the Western world to an insect-based diet, academics and their enablers in the media and government want to change your life – usually for the worse.

The latest racial conflagration tearing apart the USA has only served to give them a new angle of attack, with corporate bosses now subjecting white employees to mandatory brainwashing sessions in the name of stamping out their “whiteness.”

As easy as the transition to mass drugging would be, Crutchfield’s dream is unlikely to come true any time soon. The managers and bureaucrats who hold the levers of power lack the skill to pull off such a coup. However, remember that behind their university credentials and scientific clout lurk experts salivating at the prospect of turning you into a lab rat, and that the prototypical nerd can harbor a lust for power to rival even the most demented dictator.

Graham Dockery is an Irish journalist, commentator, and writer at RT. Previously based in Amsterdam, he wrote for DutchNews and a scatter of local and national newspapers.

Comment by tonytran2015: Is it right to deny all people their use of the versatile ethanol alcohol just to protect the few from alcoholic dependence?

At least 10 people have died after drinking alcohol-based sanitiser after liquor shops were closed in a village in the Indian state of Andhra Pradesh.

District police chief Siddharth Kaushal said the people who died had mixed the sanitiser with water and soft drinks.