A five-year-old Australian koolie dog along with a team of experts has saved more than 100 koalas in bushfire-ravaged parts of Australia since November last year.

Bear is a rescue dog who not only has a social media following but also a documentary called “Bear – Koala Hero” about his work. He has been detecting koalas in areas impacted by the fires since last summer.

AND it ought to make it easier for Australia’s First Home Buyers to purchase a property, yes?

NOT at all … they are out of work or working less hours, or if they are fortunate to even have a job it is being held together through the JOB KEEPER scheme!

The BANKS are not exactly jumping for joy at the prospect of lending money in the current circumstances.

–importing buyers and ignoring the needs of Australians

WHAT a dismal state of affairs our political leaders have created for the rest of us … forgoing the futures of our young people because greater profits can be made for ‘their mates’ by selling off housing to foreigners … it’s disgusting … a National disgrace!

Early explorers and pioneers found evidence of possible Welsh influence among the native tribes of America along the Tennessee and Missouri Rivers.

USA may had been controled by a Deep State before Yalta conference.

USA may had been controled by a Deep State before Yalta conference.

The conduct and the conditions set at Yalta conference [1] are really strange:

1. If it was a conference to formulate the way to re-establish order in Europe then why had the West wait for the Soviet army to enter Berlin?

2. More likely it was a conference to devide the spoils of war.

3. As with any multiple combatant war, each belligerent nation will have to try its best and occupy the most territory from the losing nations. Why did the US give a large territory of Eastern Europe to its Communist USSR ally while giving no spoil to France and not much to England?

4. Why did US General Patton get assassinated [2,2b] (his assassin successfully escaped) after his speaking out against giving advantage to and glorifying USSR ?

5. Knowing the brutality of the Communist Regime of USSR since 1937 [3] the US must have known that it would be an adversarial state in the future. Why did the US overlook this possibility ?

Here are the details [3b] of this brutality:

It is ridiculous to say that US intelligence has not been aware of the above fact before the Yalta Conference.

6. The only convincing explanation for the unfolding of events is that US government had been controled by a Deep State at that time and the Deep State had an ally controlling the Soviet Communist Party. [5-7]

7. A subsequent nuclear espionage case by Julius and Ethel Rosenberg [8] gives even more credibility to this suspicion.

8. The existence of the IMCC which may be part of a Deep State was first mentioned by President Eisenhower in his farewell speech [9].

It is otherwise hard to explain why USA could not have foreseen the subsequent Cold War and still offered USSR much of unearned war spoils.

“History is a set of lies agreed upon.” – Napoleon Bonaparte

It was not always thus. FDR was the most beloved of 20th-century American Presidents. He was also the most hated. Recall Madison Square Garden on October 31, 1936:[5]

Quoted from reference [5b]

I … analyzed FDR’s speech on assuming Office on March 4, 1933. … These are all terms that a person with a normal …. education … could not possibly be expected to know as legal terms apart from their common meaning….

Go to http://annavonreitz.com/fdrspeech.pdf where it is posted and see for yourself just how many deceptive legal terms and words of art were employed in this speech to veil its actual meaning and create a “Double-speak” version that only attorneys and other insiders familiar with Federal Code could interpret.[5b]

But Roosevelt actually proposed a top tax rate of 99.5 percent and then tried to impose a 100 percent tax rate via executive order! [5c]

»On the morning of August 24, 1939, he visited the Third Reich diplomat Hans von Herwarth and received the full content of the secret protocol to the Molotov-Ribbentrop Pact, signed the day before.² The secret protocol contained an understanding between Adolf Hitler and Joseph Stalin to split Central Europe, the Baltic region, and Finland between their nations. U.S. President Franklin D. Roosevelt was urgently informed. The United States did not convey this information to any of the concerned governments in Europe.«

The deceivers in democracies: Beware of the propagandists

Is America reaching its end phase ?

Comparative risks of foreign influence on different US political leaders

Is this still the same nation of USA?

This is one of her competitors

via Nitrogen Dioxide Sense and Nonsense

The credibility of Green movement is being questioned.

via Full Circle: Lessons of the Lost City in the Sands of Time, by Doug “Uncola” Lynn

A really interesting story and there is an even older article by The Puzzler since 2008 April 25:

It is fun to read but if that place was really some city there would have been archaeological remains.

Do you like this dog? said the store keeper.
Yes, said the unwary tourist.
Do you like it boiled, stir fried or roasted?
The tourist became terribly surprised !

There are also Vietnamese dog Eaters. Surprisingly, most of them are Vietnamese Roman Catholic. Why is the ratio of Vietnamese Catholic to non-Catholic dog eaters much much higher than the ratio in the general Vietnamese population? It is interesting if someone can give an answer. NEXT month at least 3,000 dogs – many stolen family pets – will be butchered, blow-torched to death and thrown in abject terror into cauldrons of boiling water and oil.

They will then be served up as some sort of freak-show culinary delicacy. Welcome to the Yulin dog eating festival, China’s annual celebration of utter human depravity. 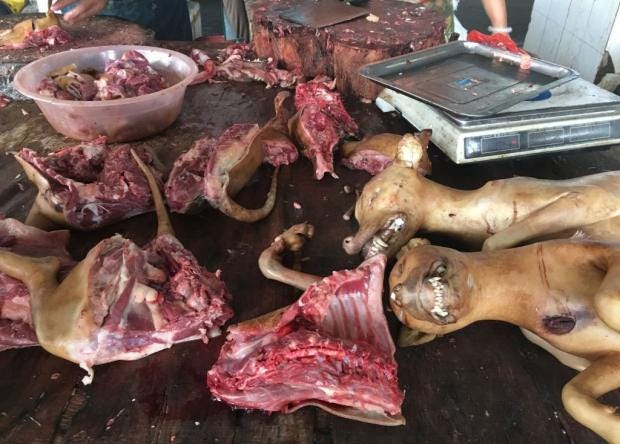 Justice For Tiny Puppy Skinned Alive And Tossed In A Garbage Can To Die!

The vanishing animals that future generations will never see

Reclassify the theft of a pet to a specific crime…